Rangers started the Scottish Premiership 2022/23 season on a positive note after completing a 2-1 comeback victory over Livingston. Joel Nouble scored the opener for the home team within the first five minutes of the match. Scott Arfield came off the bench to score an equaliser in the 72nd minute, and James Tavernier’s goal secured the win in the 74th minute. 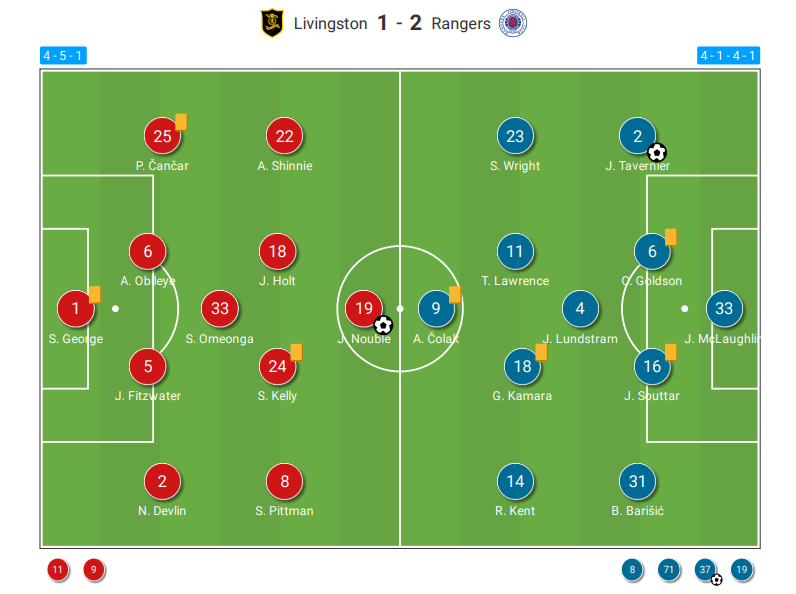 The home team started in a 4-5-1 formation, while Rangers started in a 4-1-4-1 formation. Antonio Colak, Tom Lawrence and John Souttar made their league debuts for Rangers. The line-ups look a bit similar, but John Lundstram operated in a more defensive role than his opposite player in the same position. 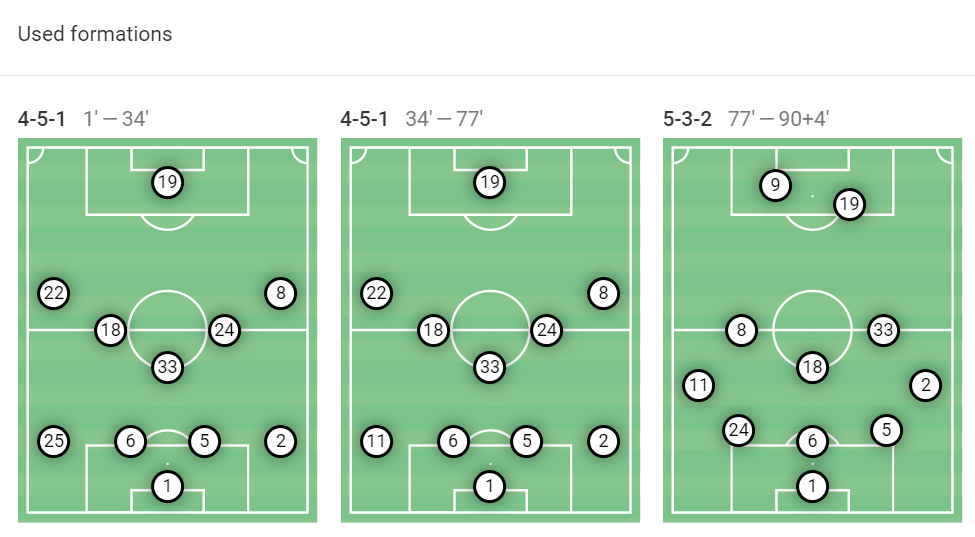 The above viz shows the average formation of Livingston at three different phases in the match. In the first 34 minutes, the home team played in a 4-5-1 formation, and this continued till the 77th minute. During the last phase of the game, the manager made some defensive changes and operated with two forwards to try and sneak in a counterattack. They lined up in a 5-3-2 formation. Livingston had only 20.57 of the ball possession during the match. The players attempted 115 passes with a 77.4% passing accuracy rate. They were unable to hold the ball.

Rangers played in the same formation till the 84th minute. Giovanni van Bronckhorst’s men decided to defend their goal in the last phase and played with two defensive midfielders. Rangers dominated the ball with 79.43% of the ball possession. The Gers attempted 721 passes with a high accuracy rate of 88.9%.

Livingston attempted five shots during the match and were able to hit the target twice. Only the first two shots attempted by the home team were on target. One shot was off target and two shots were blocked by the opposition players. The xG rate of the team was 0.75.

Rangers players attempted 17 shots towards the opposition goal, with six being on target. The goal was scored towards the left of the goalkeeper. The home team blocked shots attempted by Rangers, and the shots that were straight towards the keeper were saved easily. Rangers’ xG rate was 2.11. 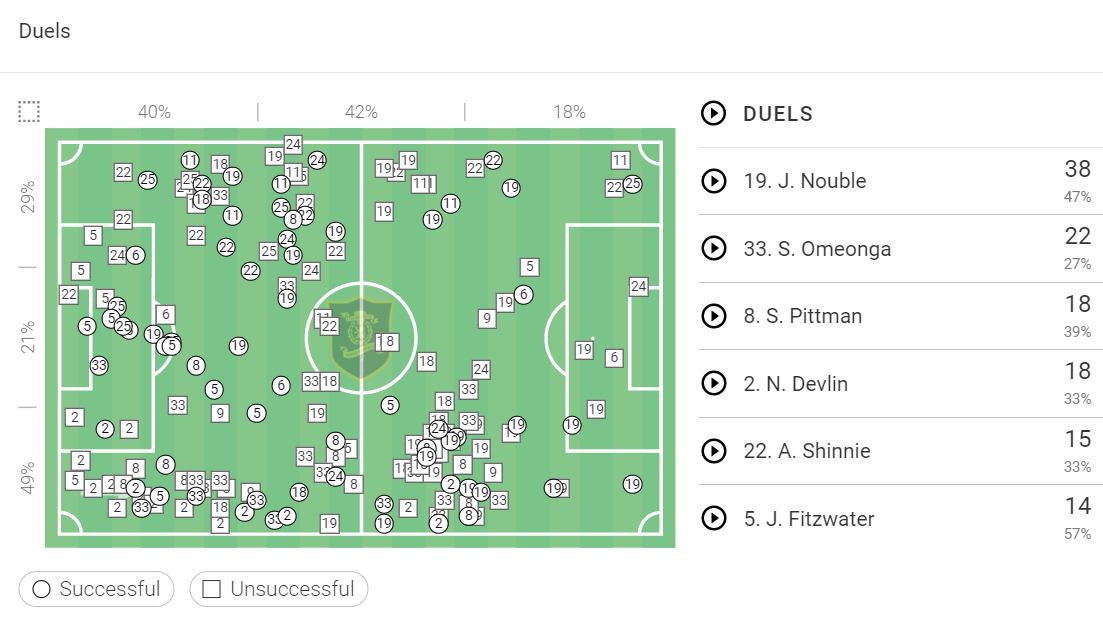 The home team contested 187 duels with a 41.18% success rate. The above viz shows all the duels that were successful and unsuccessful. We can observe that most of the duels were contested on the right side. The attacks were made from that particular side, but the players were unable to win most of the duels. 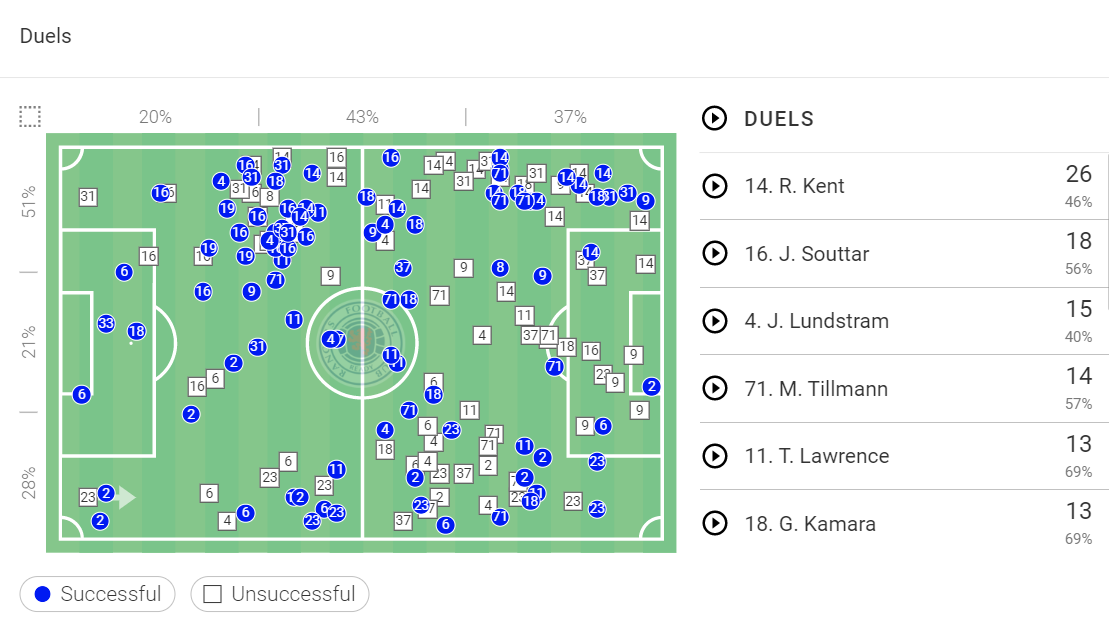 The Rangers also contested 187 duels but won only 54.01% of them. Most of the duels were won on the left side, as shown in the above viz. The duels on the right-hand side ended in favour of the opposition. 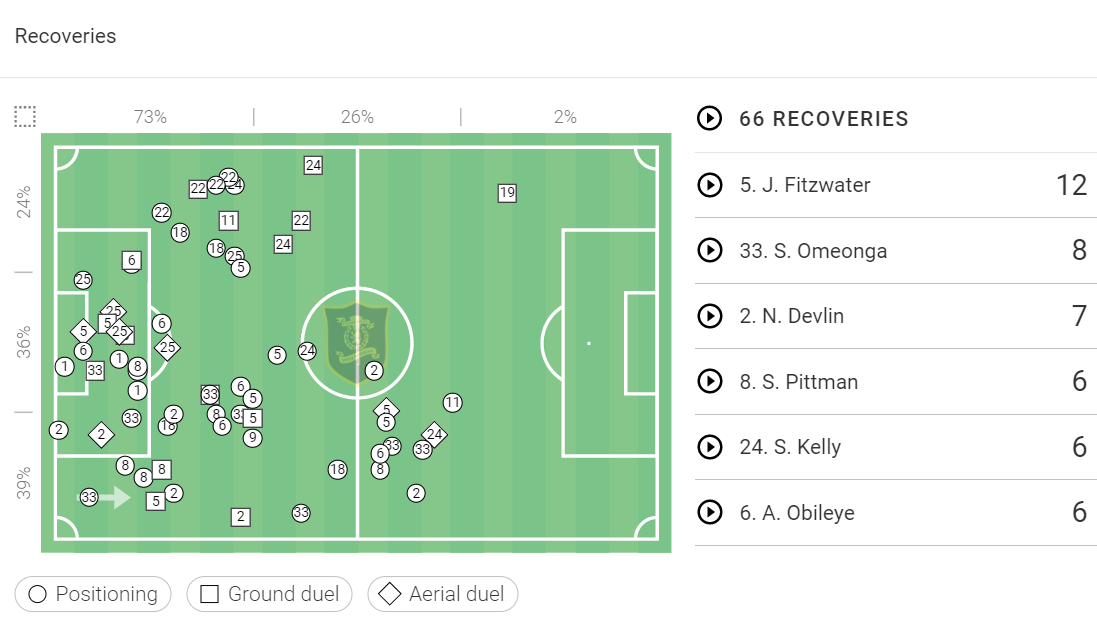 Livingston’s players made 66 recoveries on the field and most of them were inside the defensive third. Jack Fitzwater made the most recoveries for the home team. 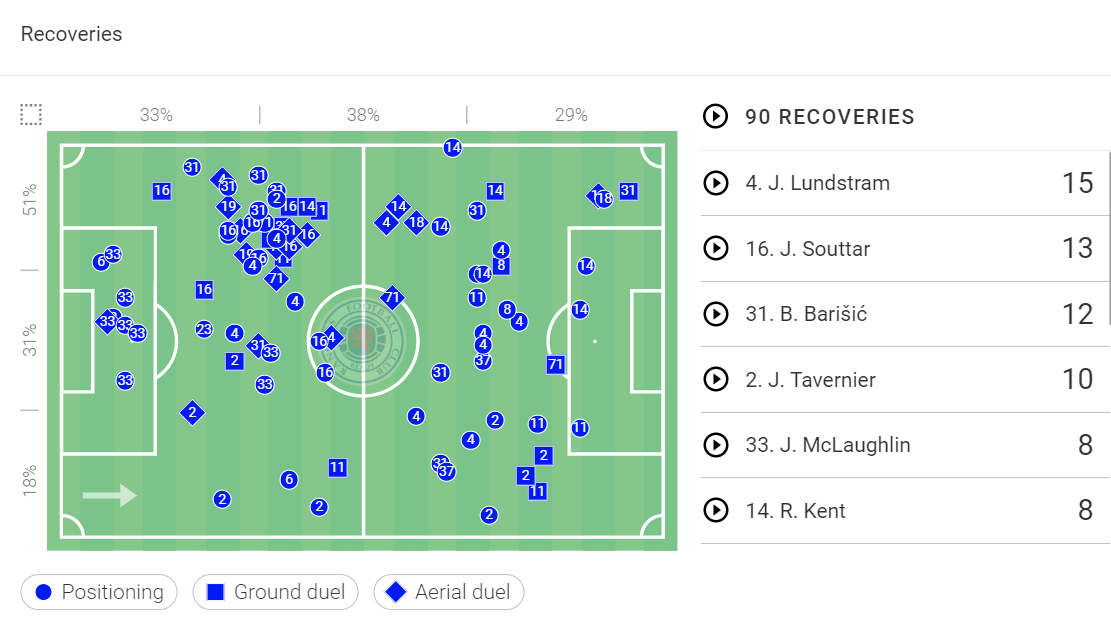 Rangers players made 90 recoveries, and most of them were in the middle third. The away team attacked from the left and made a lot of recoveries towards that particular side. Lundstam made the most recoveries for his team to not easily lose the attacking momentum.

Rangers dominated the match and deserved to take three points from this game. They attacked more and created more chances during the match. Livingston had to defend for the most part of the match and struggled to keep the ball. The away team will look to take the momentum into the next match and remain in the title hunt from day one of the league.