Rangers will host St. Johnstone at the Ibrox stadium in the Scottish Premiership. The hosts will be looking for their third consecutive win after midweek heroics in the UEFA Champions League qualification rounds. St. Johnstone also registered their first win of the season against Motherwell last weekend, and that will be a confidence booster for the squad after struggling for points last season.

In the last game, Rangers hosted newcomers Kilmarnock and registered a 2-0 win. Giovanni van Bronckhorst’s men have now scored four goals and only conceded a single goal. Their xG rate was 2.11 in both matches, and they dominated ball possession throughout the two matches.

St. Johnstone made the trip to Motherwell and came out as the winners with a 2-1 scoreline. After failing to create enough chances in the first match, St. Johnstone showed some improvement against Motherwell. They had more possession of the ball than in the previous match and created more goal-scoring chances.

Let us look at three tactical points according to the stats obtained from the previous matches.

Rangers’ creativity on the right 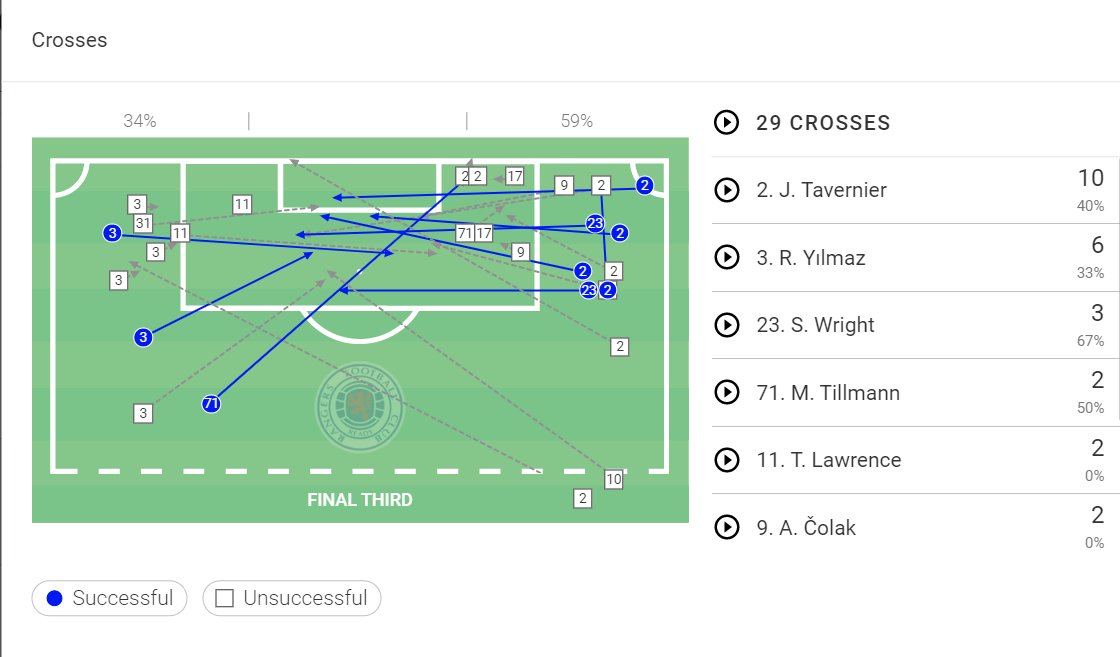 Rangers will be a threat from the right side, and it will be led by right-back James Tavernier. He was the highest goalscorer and top assist provider for Rangers last season. This season, the Gers have attempted 90 positional attacks, with an average of 45 attacks per match. 40 attacks have come from the right side. This shows that almost 50% of the attacks have come from that particular side. Rangers have been high crossers of the ball. In the first match, 39 crosses were attempted, with 12 being successful, and in the last match, 29 crosses were delivered, of which nine found a teammate inside the opposition’s penalty box. 39 crosses were attempted from the right side, with 14 successfully finding a teammate inside the opposition’s penalty box. St. Johnstone players will have to deal with the danger of continuous passes into their penalty box.

St. Johnstone’s vulnerability at the back 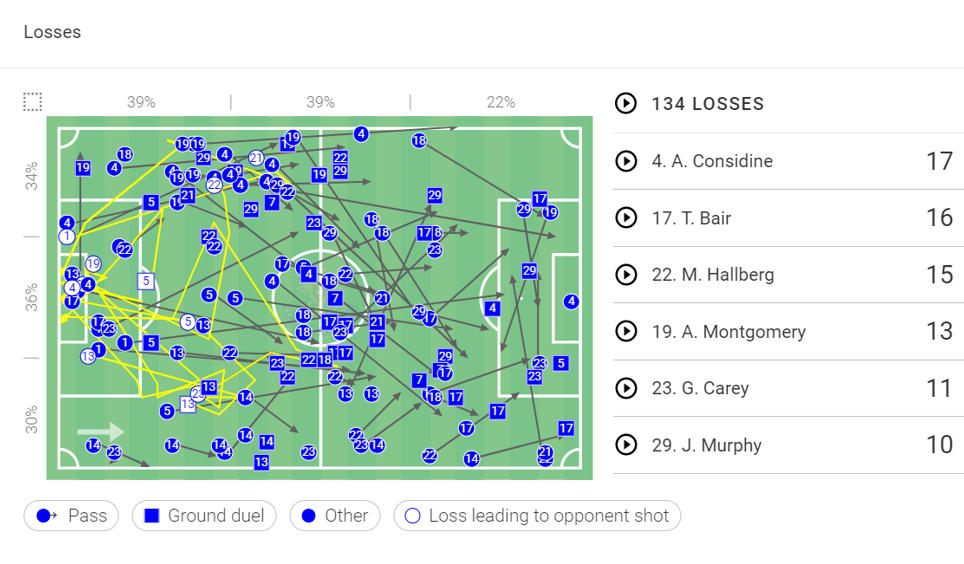 St. Johnstone players will have to defend more in this match than they did in the other two matches. They will try to stop this constant wave of Rangers defence by winning duels in crucial areas. In the last two matches, they have won 71% of their defensive duels and averaged 90.5 recoveries. However, their defence lost the ball in crucial areas, and this might have cost them against Rangers. They average 118.5 losses, with 30 losses in the defensive third and 52 losses in the middle third. The above video shows the 144 losses in the previous game. It can be observed that most of the losses in the defensive half are due to poor passing. This has led to plenty of shots towards the goal. Rangers will look to capitalise on the sloppiness of the opposition, and St. Johnstone will look to improve their stats in this particular domain.

Rangers are an attacking side and attempted 17 shots each in both matches. They had a similar xG rate of 2.11 in these two matches. 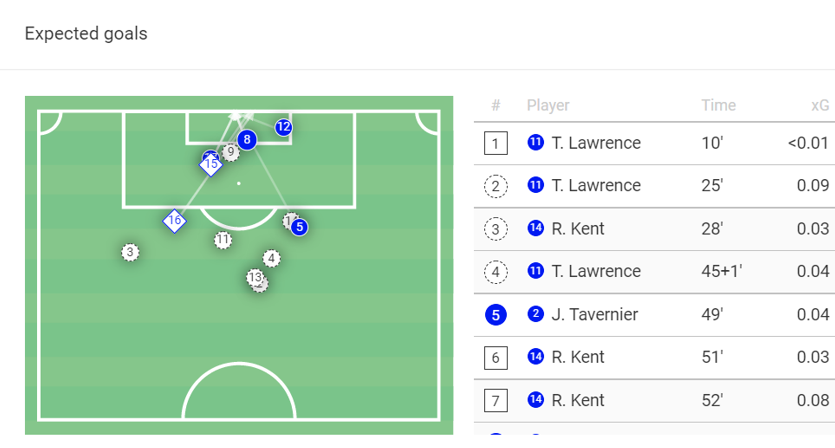 In the first match, five shots were on target for the Gers. They attempted seven shots from inside the box, and two chances were converted by the players. It can be observed that Rangers players find space inside the opposition’s penalty box and have attempted a few shots from in front of the goalkeeper. 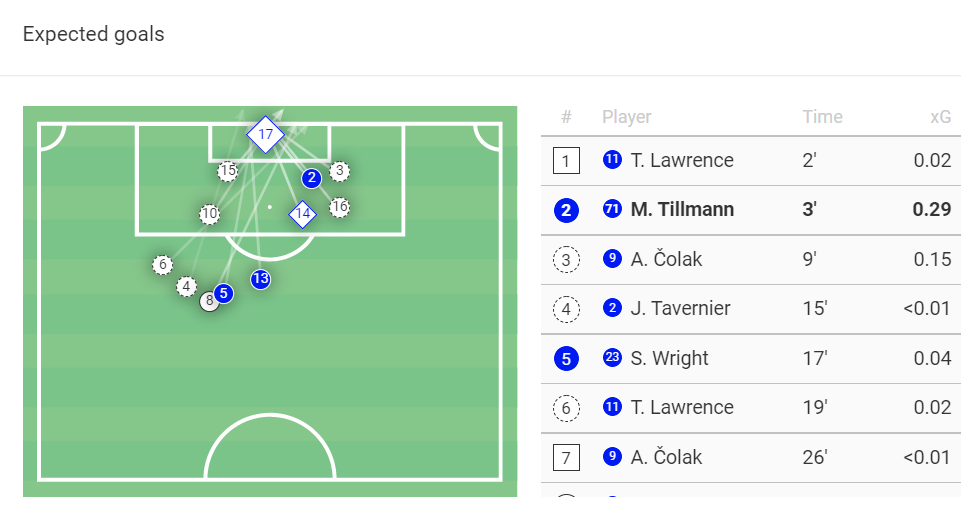 In the last match, the scenario was a bit similar as the Gers attempted seven shots from inside the box and scored both goals from inside of it. One of the goals was a simple tap-in from inside the opposition’s 6-yard box. They will, once again, try to flood inside St. Johnstone’s penalty box and attempt shots from close range to score goals.

Ryan Kent recovered from his injury and played the full 90 minutes in midweek. He will take back his position on the left side. Malik Tillman has also impressed everyone since he joined from Bayern Munich. He will be pushing for yet another start, but this time on the right side. Alfredo Morelos is yet to start his first match of the season. He will be eager to replace Antonio Colak in the number nine role. Ianis Hagi, Filip Helander, and Kemar Roofe are still sidelined with injuries.

Murray Davidson could return to the starting XI after serving his one-match suspension. Callum Booth, Chris Kane, David Wotherspoon, and Tony Gallacher won’t be available for the visitors.

Rangers will be the favourites to take three points from this game. They will look to improve their goal difference and stay close to Celtic. St. Johnstone have confidence from their last game, but this won’t be an easy game for them. They will be happy with a single point from this game.