The Scottish Premiership is around the corner, and the 12 teams are ready to compete for the league title. Every team has been busy adding players and removing the unwanted ones from the team. Celtic and Rangers will once again remain the favourites to compete for the title. Giovanni van Bronckhorst will be managing Rangers in his first full season with the club. He has brought in a lot of new faces to strengthen his side. Rangers suffered a heavy blow as they lost two of their key players, Joe Aribo and Calvin Bassey, in the summer. They already knew that these players could be on their way out and signed players accordingly to fill in their positions. Now, the manager will look to add these names to the starting XI this weekend against Livingston. All seven players won’t be featuring in the starting XI, but here are some of the players who are likely to get a spot in the season opener. 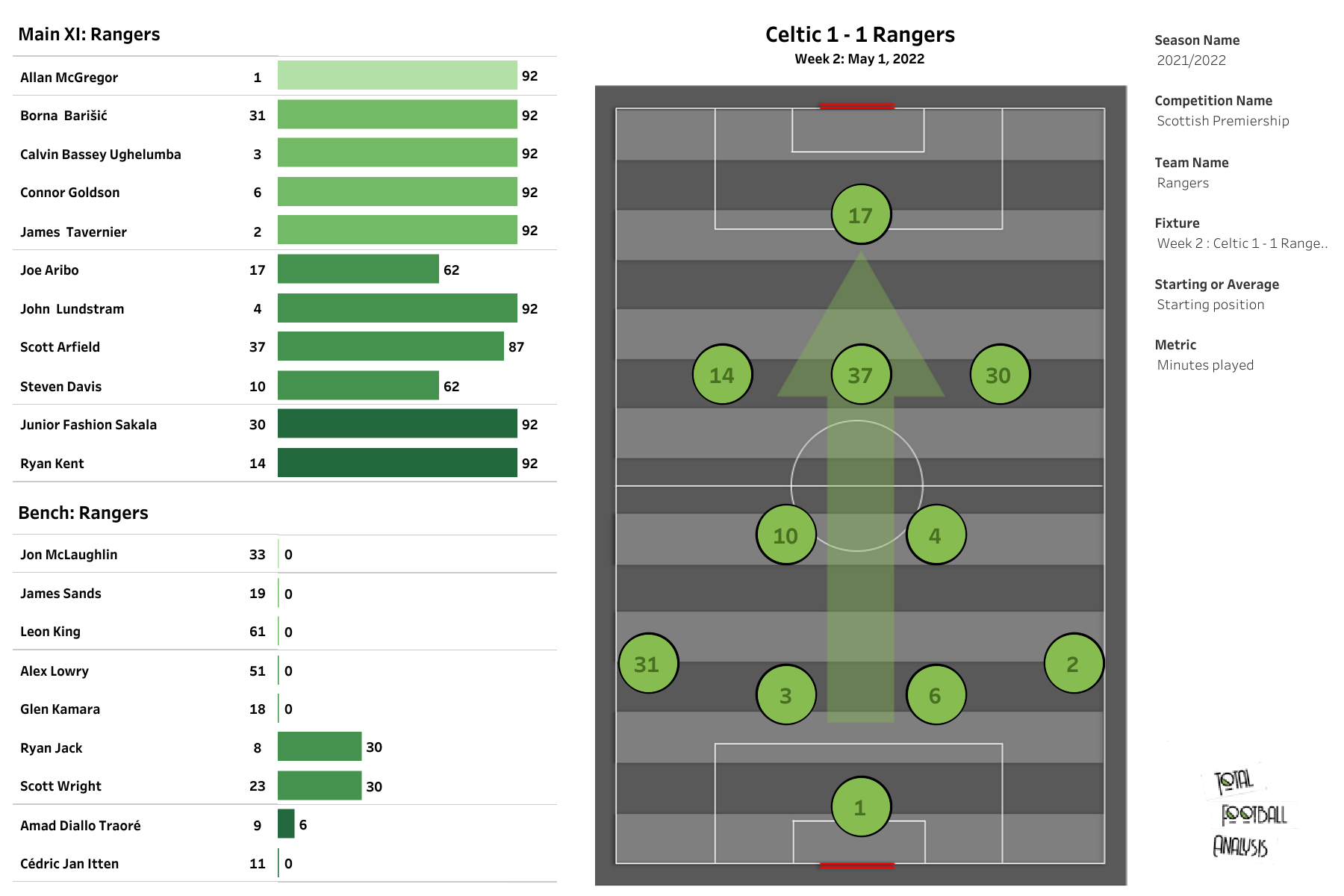 Rangers play in a 4-2-3-1 formation, as shown in the above viz. The above visual shows the line-up against Celtic in the Championship round last season. Calvin Bassey will be replaced in the Rangers’ backline by John Souttar. He will be accompanied by Connor Goldson in the centre, with Borna Barisic and James Tavernier playing as the two full-backs. Glen Kamara and John Lundstram are likely to feature as the two central midfielders, with Lundstram playing a more defensive role. Their star player, Ryan Kent, will feature on the left and is likely to be accompanied by three new faces. Antonio Colak is expected to lead the line in the absence of Alfredo Morelos. Former Derby County captain, Tom Lawrence, is another great addition, and he could feature in the number ten role. Rabbi Matondo has been signed to resolve Rangers’ right-wing issues. He is likely to feature as a right-winger. 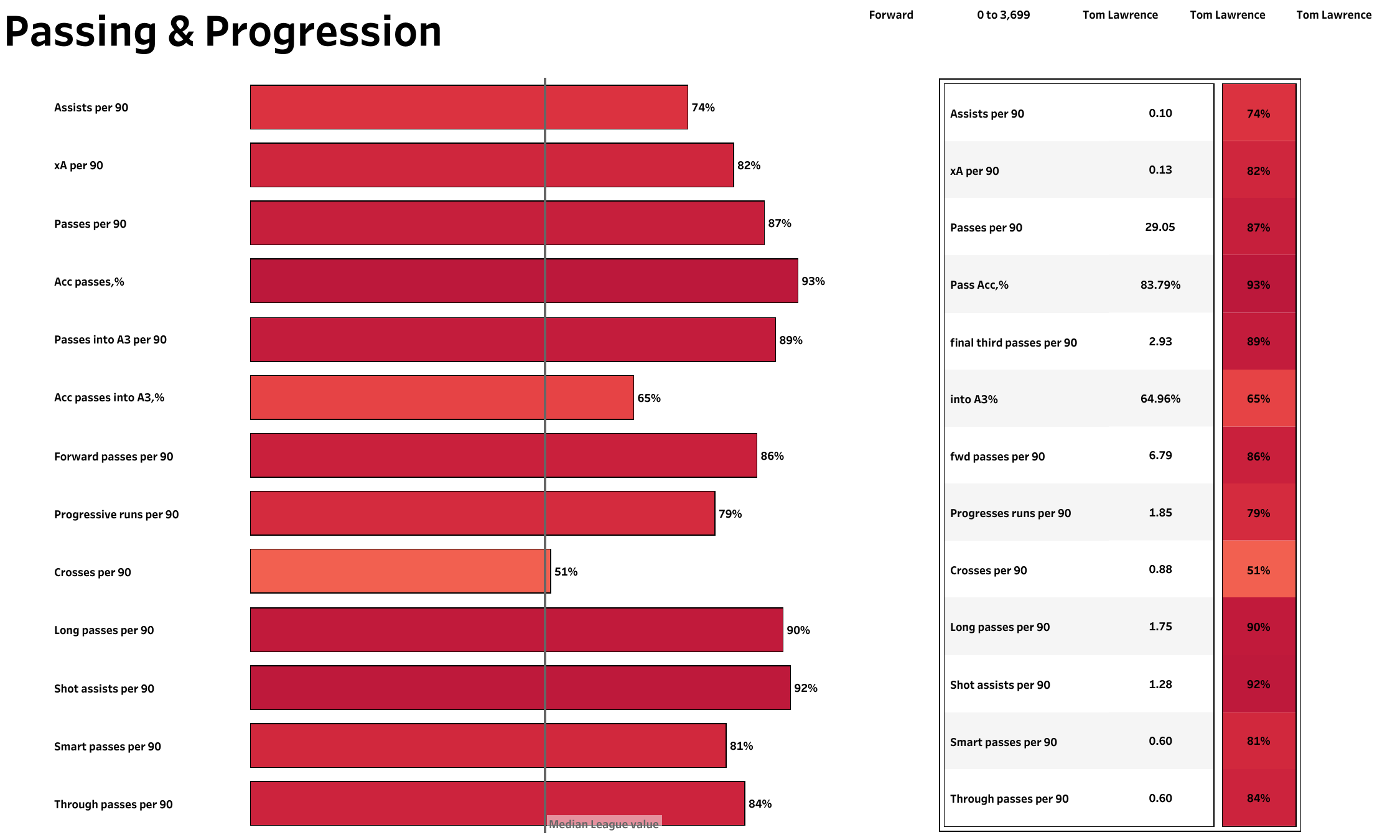 Tom Lawrence is the key addition to Rangers’ attack. He left Derby County after the club got relegated. The 28-year-old was their main player as he scored 11 goals and provided five assists in 38 league appearances. The above viz shows the passing stats of the player. When looking at the above chart, the general rule is that the longer the bar, the better the performance — you can see the league average in the middle, and the % is the percentile rank the player is in. We can observe that Lawrence can add creativity from the midfield and help his teammates score goals. 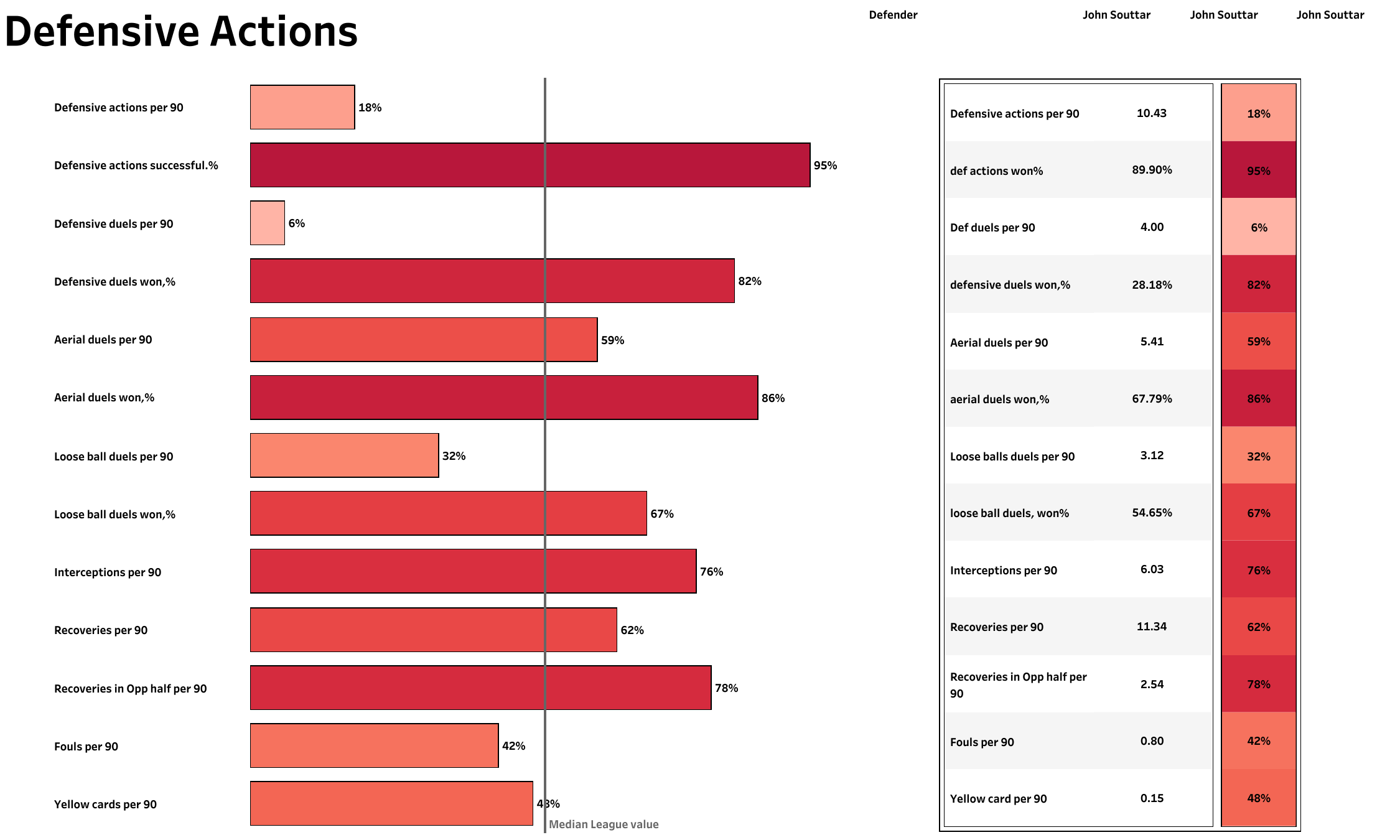 Souttar was a key signing in the defence for Rangers. He agreed on personal terms in January and made a move in the summer. His ability to win defensive actions and duels means that Rangers have a solid defence this season. The opposition might find it difficult to beat the defence.

Rabbi Matondo is in his early days of professional football. He is an exciting talent who will look to trouble the defence with his pace. Colak has scored goals for his previous teams, and he will look to add a few goals to his tally before the return of Morelos. Rangers’ new signings will be key in yet another Scottish Premiership season. They will look to get back the title from Celtic.