Rangers will face German club Eintracht Frankfurt in the final of the UEFA Europa League at the Estadio Ramón Sánchez Pizjuán in Seville. This will be their first attempt to win silverware this season. The Scottish Premiership runners-up already have the FA Cup final lined up for Saturday against Hearts. Rangers lost the Scottish Premiership title by a gap of four points, and Giovanni van Bronckhorst will look to compensate with a win in both finals. For this, Rangers have to play at their full strength, and the manager will select his best XI on the pitch. He rested key players in their last league game, and they will be eager to get on the pitch and get their hands on the trophy. There are a few injury concerns in the team, and here is the best possible line-up that the manager could go for.

Rangers will be without their top goalscorer Alfredo Morelos, who also missed the end part of the season. Filip Helander and Ianis Hagi will be the other two absentees. 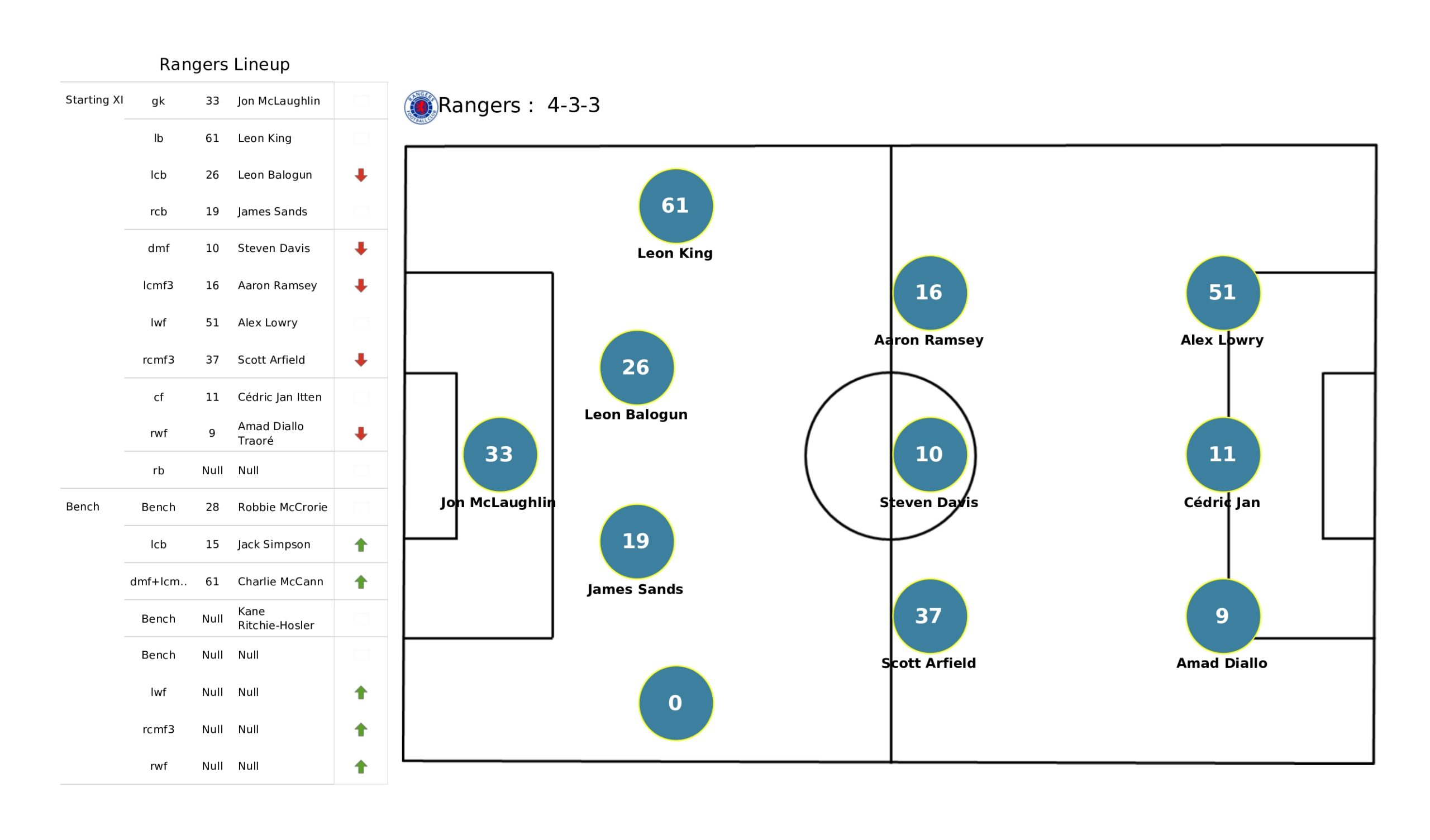 The Scottish side named a young side for their recent match against Hearts. Rangers played in a 4-3-3 formation with quite an inexperienced backline. Leon Balogun was the most senior player in the defence. The midfield comprised of three experienced players in the form of Aaron Ramsey, Steven Davies, and Scott Arfield. The attack was led by Cedric Itten, and he was supported by Amad Diallo and Alex Lowry. The manager is expected to make nine to ten changes in the starting line-up from this match. 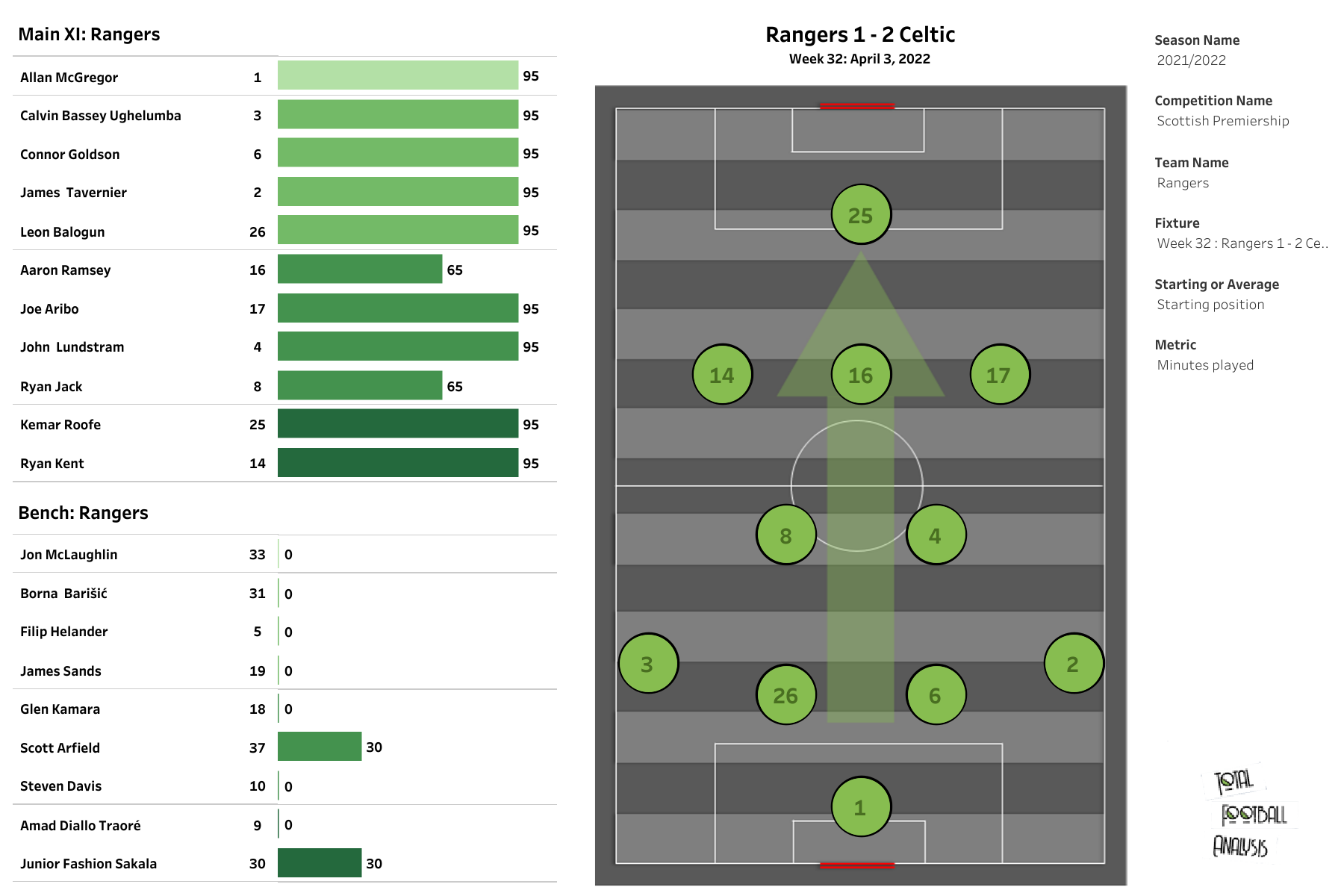 The above viz shows Rangers’ formation from their Matchweek 32 clash against Celtic. Rangers played in a 4-2-3-1 formation, with Kemar Roofe leading the line. Ryan Kent, Joe Aribo, and Aaron Ramsey played behind him. Ryan Jack and John Lundstram manned the central midfield position. The back four comprised Leon Balogun, Calvin Bassey, James Tavernier, and Connor Goldson.

Rangers played in a 5-4-1 formation in their semi-final second leg. They were without a regular striker for this game. The team comprised Calvin Bassey, Connor Goldson, and John Lundstram in the back three. John Lundstram has featured as a centre-back in a few games this season. Borna Barisic and James Tavernier were the two wing-backs. Joe Aribo led the line and was supported by the ever-present Ryan Kent, Glen Kamara, Ryan Jack, and Scott Arfield. With Kemar Roofe returning to the team, here is the best possible line-up that Rangers could be lining up in.

Allan McGregor is expected to start in goal, and the team could play in a 4-2-3-1 or a 4-5-1 formation. Borna Barisic, Connor Goldson, Calvin Bassey, and James Tavernier are expected to start at the back. Ryan Jack is expected to return to the starting XI and will play alongside John Lundstram. Joe Aribo, Glen Kamara, and Ryan Kent will play behind the striker, Kemar Roofe. If Roofe starts on the bench, then Joe Aribo might once again lead the line, and Scott Wright or Scott Arfield could start on the left side. Aaron Ramsey, Fashion Sakala, and Steven Davies are the other options who could make it to the starting XI.

Rangers will look to add the UEFA Europa League to their trophy cabinet. They have given some incredible performances in the competition this season, and Giovanni van Bronckhorst is expected to start his strongest team in his quest for a first title as Rangers manager.