Scottish Premiership defending champions Rangers will take on Celtic this Sunday in the Old Firm Derby. This will be the third meeting between the two teams in the league this season. Rangers won the first match 1-0 and lost the second one 0-3, which cost them the top spot. The defending champions are now three points behind their rivals, and a win for them will take them level on points with Celtic. Rangers are unbeaten in their last seven games and have qualified for the quarter-finals of the UEFA Europa League. Giovanni van Bronckhorst’s men will be high on confidence, and this is how they could line up for this crucial fixture. 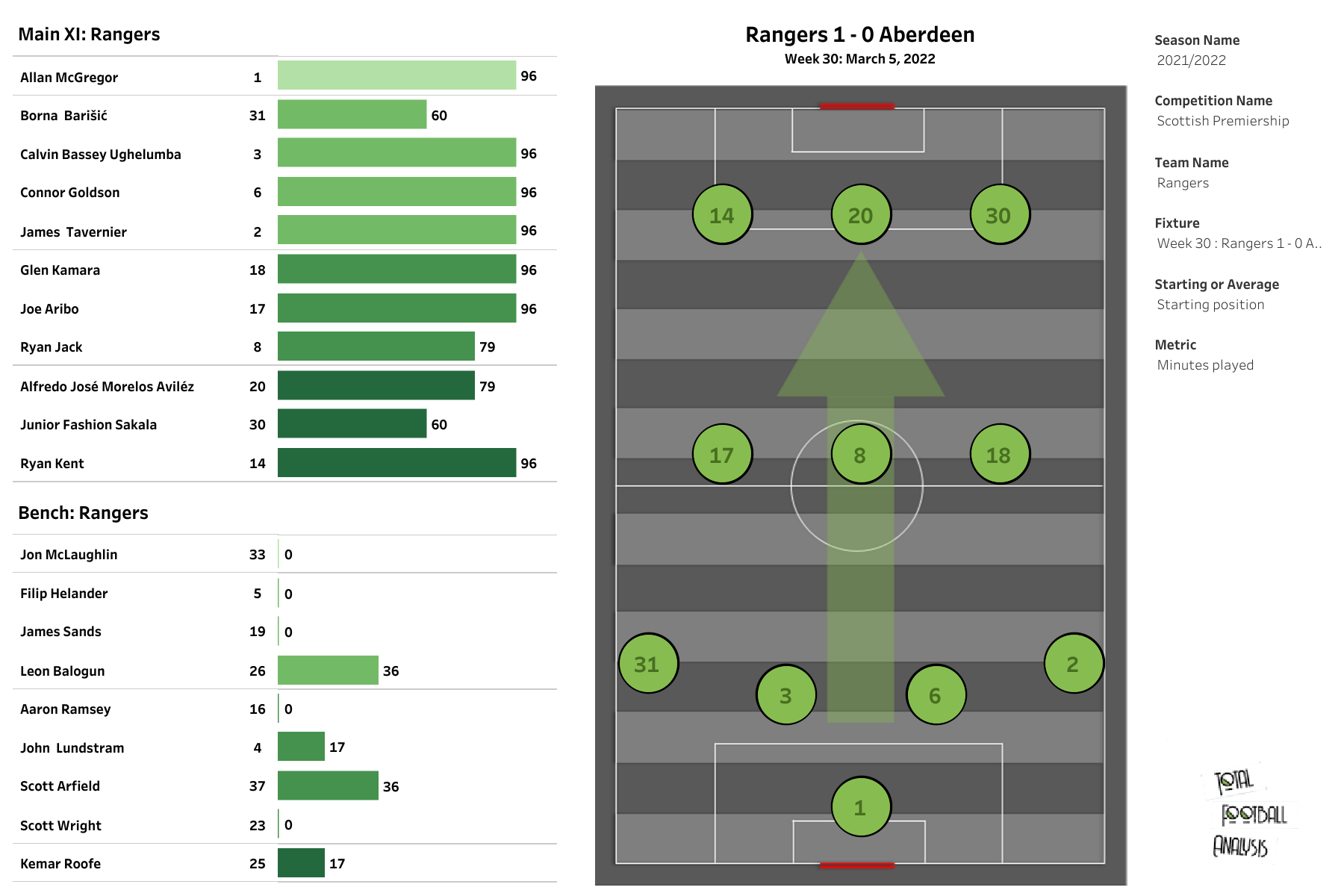 Rangers play in a 4-3-3 formation with a lone striker at the top who is supported by two wingers. The above viz shows the formation in the match week 30. Alfredo Morelos led the line and was supported by Ryan Kent on the left and Fashion Sakala on the right. The midfield three saw the partnership of Ryan Jack, Joe Aribo, and Glen Kamara. Borna Barisic, Calvin Bassey, Connor Goldson, and James Tavernier completed the back four. 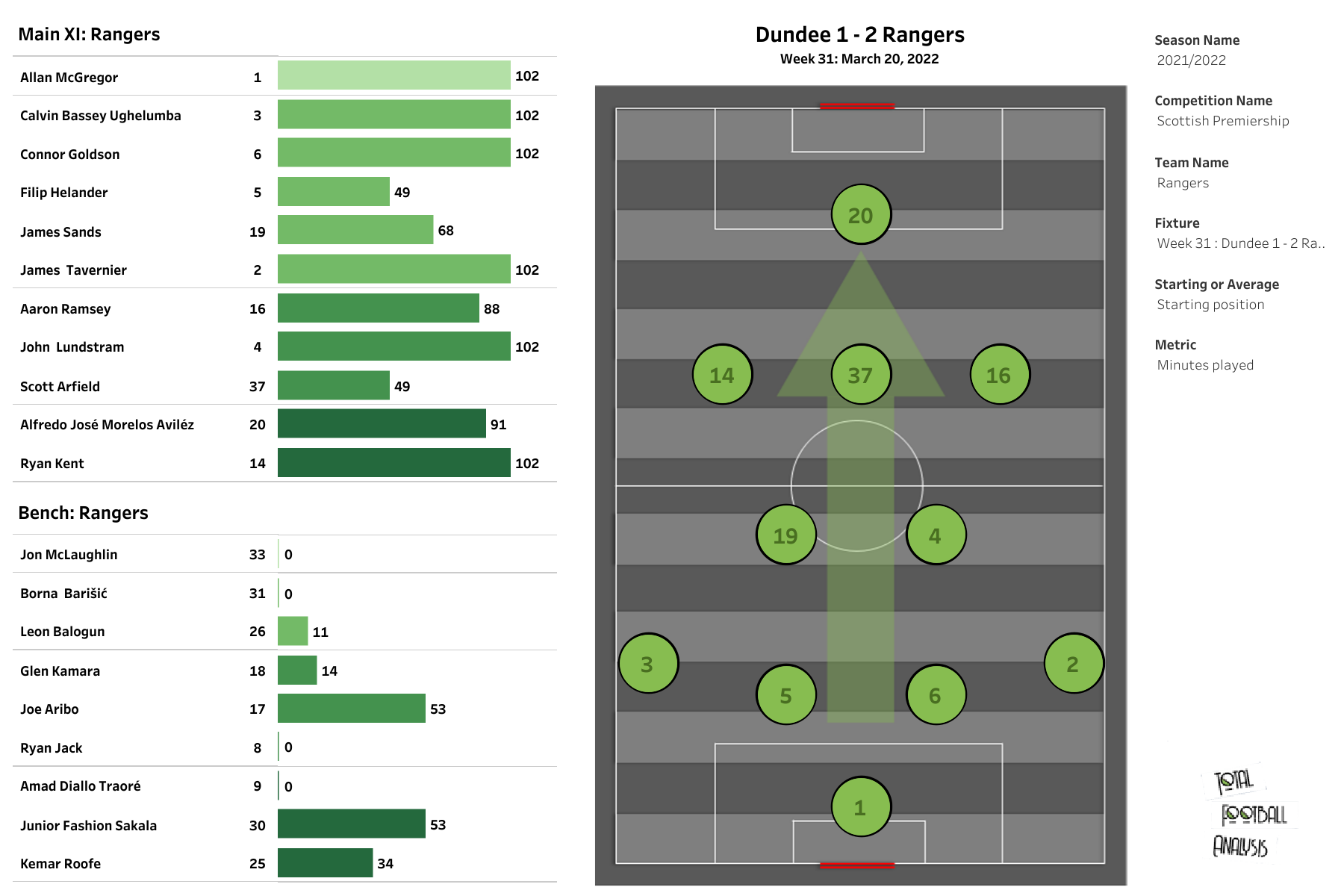 The above viz shows Rangers’ formation in their previous game. Giovanni van Bronckhorst changed the formation to 4-2-3-1. This time, Alfredo Morelos was supported by Ryan Kent, Scott Arfield, and Aaron Ramsey on the right. James Sands and Lundstram played in the midfield. Calvin Bassey played as the left-back, and Connor Goldson played at the heart of the defense along with Filip Helander. 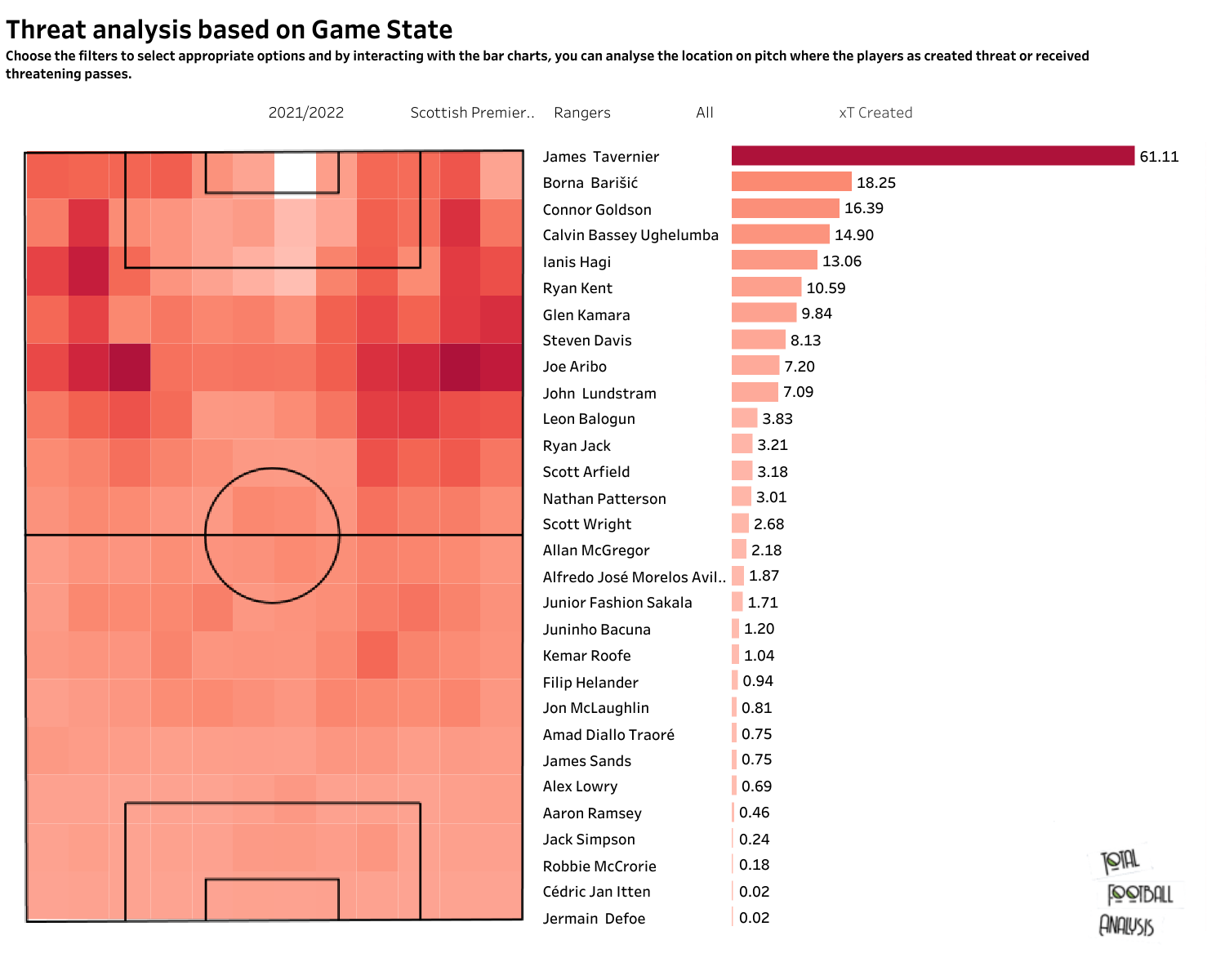 By looking at the above viz, we can see the players who have created the highest threats and what the threat creation zones are for Rangers. The defending champions have attacked mostly from the wider sides, especially the right side. Right-back James Tavernier has created the highest treats from passes. He is followed by Borna Barisic and two centre-backs.

The last time these two teams met, the Rangers were without their star player, Alfredo Morelos. He is in doubt this time as well, after suffering an injury while on international duty. If he is declared fit, he will lead the line, otherwise, there are chances that Kemar Roofe might get the nod ahead of him. Ryan Kent has cemented his position on the right and will be their main man on that side. Aaron Ramsey scored a goal in his first start and is likely to feature on the right. The manager will play with the strongest midfield three, comprising Joe Aribo, Ryan Jack, and Glen Kamara. Glen Kamara has been playing in a more advanced role in recent times and could once again feature in that role. Calvin Bassey will get the nod ahead of Borna Barisic in the left-back position. Connor Goldson and Leon Balogun will remain at the heart of the defense. James Tavernier, their most creative player, is expected to start on the right.

Rangers will look to avenge their loss and catch the league leaders. They have a very strong bench, and the manager will have plenty of options to choose from. They would be looking to start with the strongest 11 and immediately put pressure on the opposition. This is a crucial match for both teams.