Ryan Kent was once again one of the standout performers for Rangers this season. The 25-year-old English winger is consistently giving good performances season-by-season and has gained the interest of a few other top European clubs. However, Rangers won’t let go of their main man so easily and will look to keep hold of their winger. With Alfredo Morelos being linked with other clubs, the winger will automatically become their main attacking threat in case the Colombian striker leaves.

The 25-year-old made 28 appearances for Rangers in the Scottish Premiership. He scored two goals and provided eight assists. Kent missed a few matches due to injury but created constant threats from the left-side for Rangers. 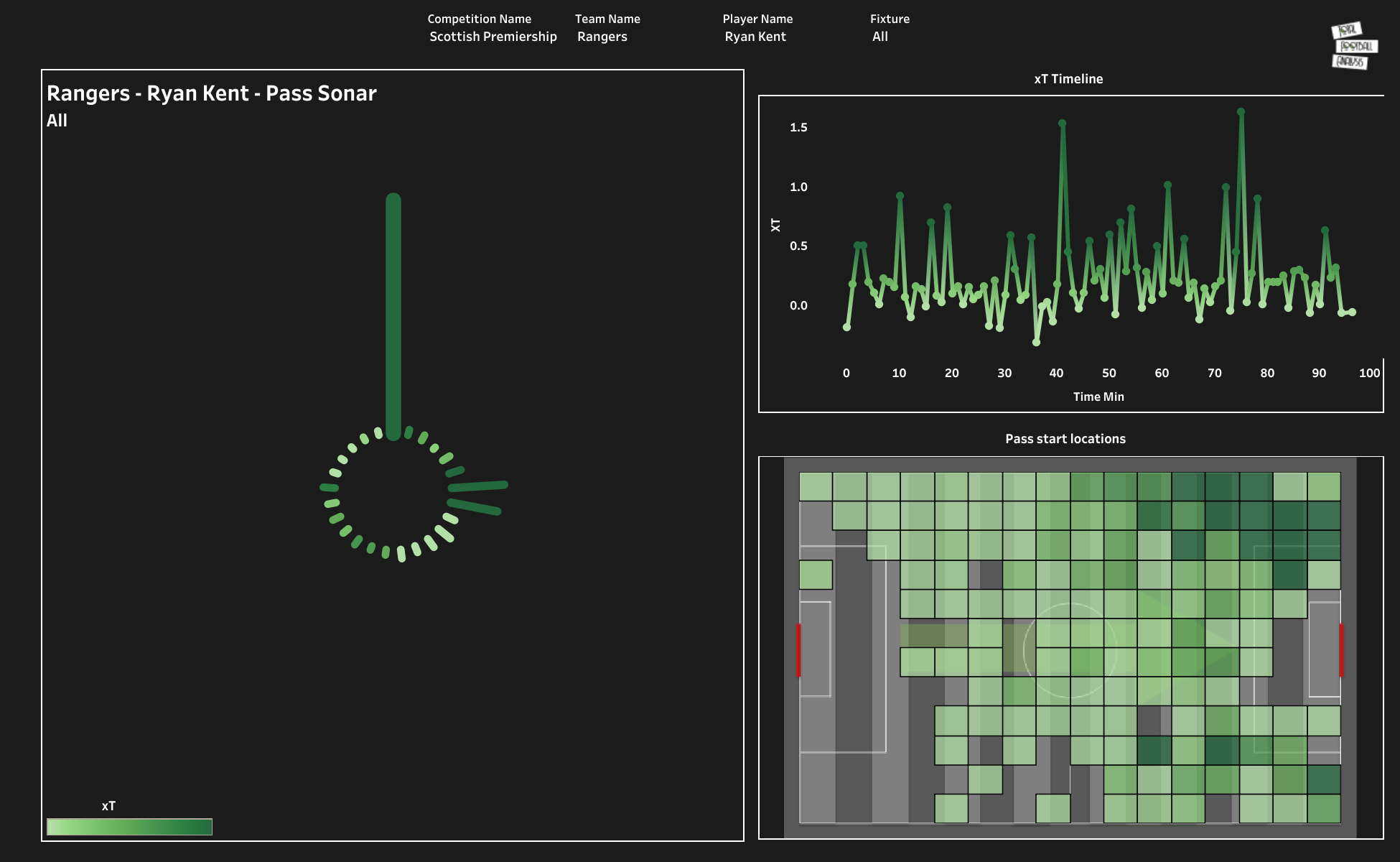 The above viz shows the pass start location as well as the threat created from passes at different time intervals. Kent is a good dribbler of the ball and likes to make use of the full width of the field. He averaged 9.03 dribbles per 90 minutes and had a success rate of 68.89%. The player even penetrated the opposition’s penalty box and averaged 3.33 touches per 90 minutes inside the opposition’s penalty box. The xT timeline shows that the winger was effective with his passing during the second half of the matches. Kent attempted most of the passes towards the midfielders, Joe Aribo and Glen Kamara. The highest threat was created from passes attempted towards the striker, Alfredo Morelos. 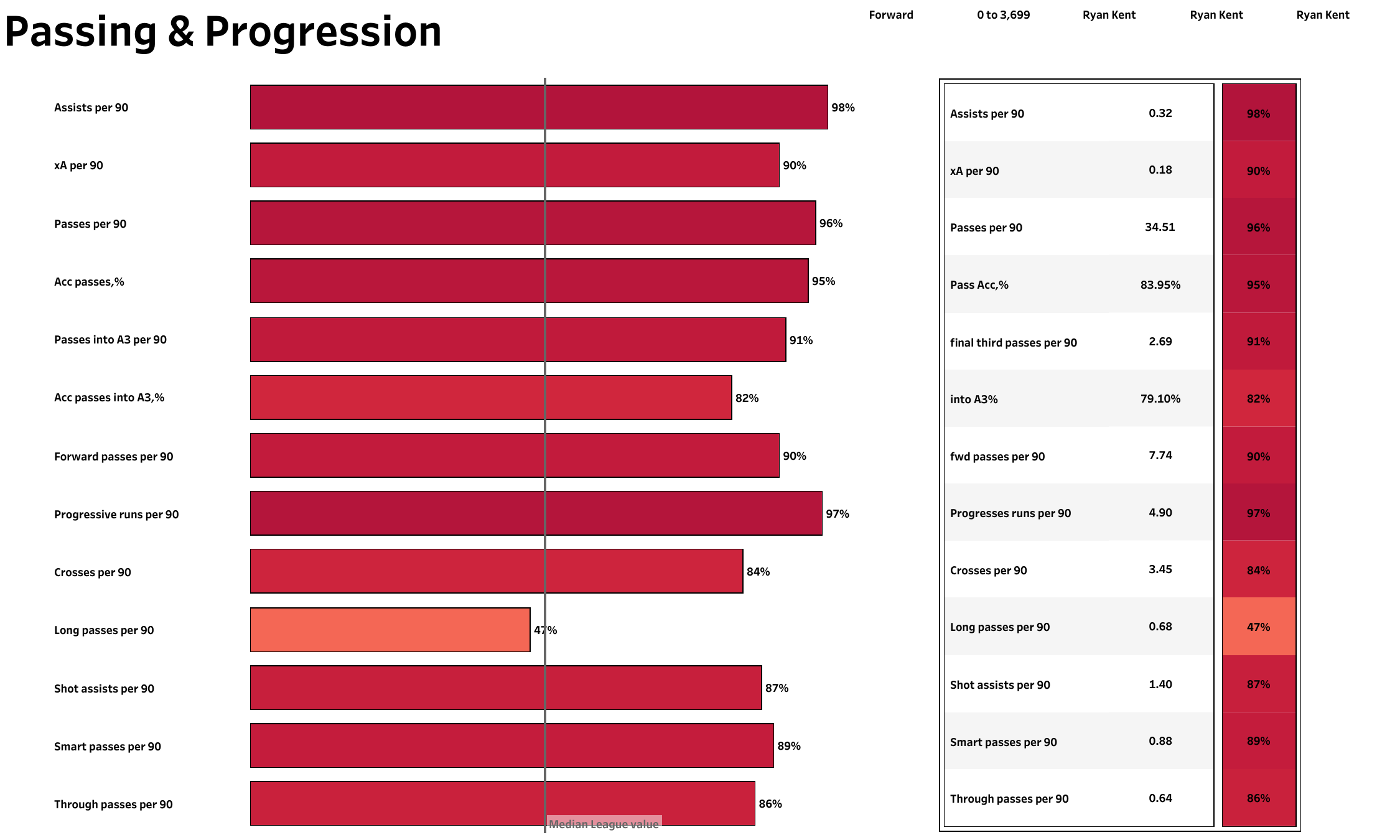 When looking at the above chart, the general rule is that the longer the bar, the better the performance — you can see the league average in the middle, and the % is the percentile rank the player is in. The above viz shows the passing and progression stats of the winger in comparison with other forwards in the Scottish Premiership. Kent had a very high percentile rank in all the above-mentioned stats except for attempting long passes. He averaged 34.5 passes per 90 minutes with an accuracy rate of almost 84%. This chart shows that he was a constant threat on the left side and created a lot of chances for his team. 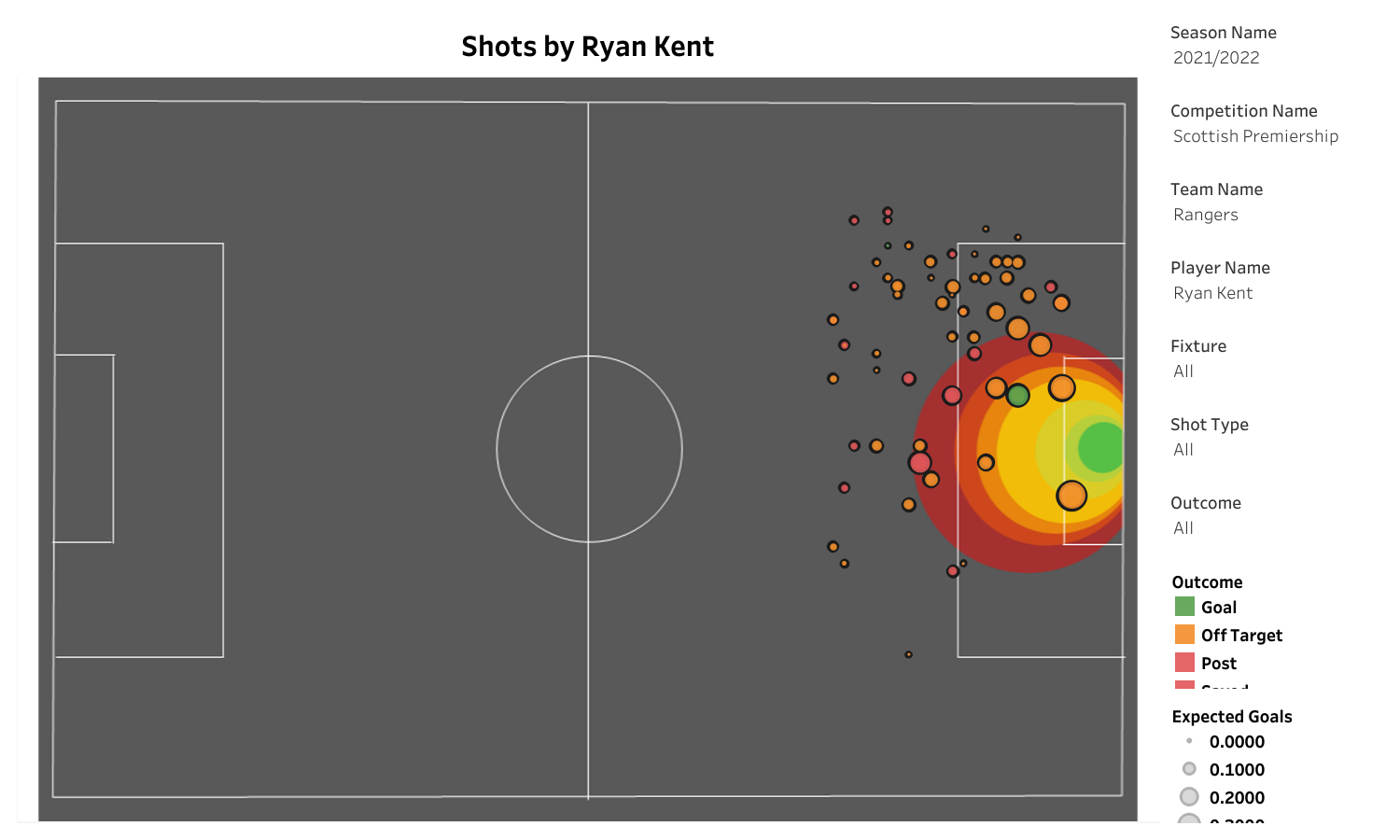 Kent struggled to find the back of the net. The above shot map shows all the 58 shots that were attempted by the winger last season. He averaged 2.57 shots per 90 minutes and managed to hit the target 18 times. The player was involved in 15.9 attacking actions per 90 minutes and had a 41.56% success rate. The shot map shows that Kent attempted most of the shots from outside the opposition’s penalty box. He scored two goals, and one of them was scored from outside the penalty box.

The winger had a less productive season this year but led the passing stats amongst other forwards in the league. He created constant threats for Rangers, and his consistency led to the interest of a few other clubs. Rangers will look to stop his transfer and expect more goal contributions in the next season.