USMNT players are making their mark on European football. One of the players who has recently been in the limelight is Rangers‘ Malik Tillman. The 20-year-old attacking midfielder was signed from Bayern Munich on a season-long loan deal. With just five games into the Scottish Premiership 2022/23 season, the player is already being liked by the Rangers’ supporters. He played a crucial role in their qualification for the UEFA Champions League. This is his first spell away from Bayern Munich and some of the stats show why he is becoming a fan favourite at Ibrox. 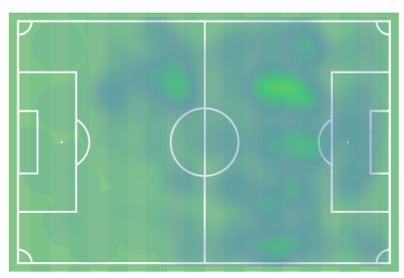 Malik Tillman has made eight appearances for Rangers this season. Half of the appearances have come in the Scottish Premiership and the other half have come in the UEFA Champions League qualification rounds. He has netted two goals and provided an assist. He scored the winning goal in the first qualification round played by Rangers and provided an assist against PSV to help his side reach the elite competition. Giovanni van Bronckhorst has used him as a centre midfielder, an attacking midfielder, and as a winger. The above viz shows that Tillman has covered a lot of areas in the middle and attacking third. 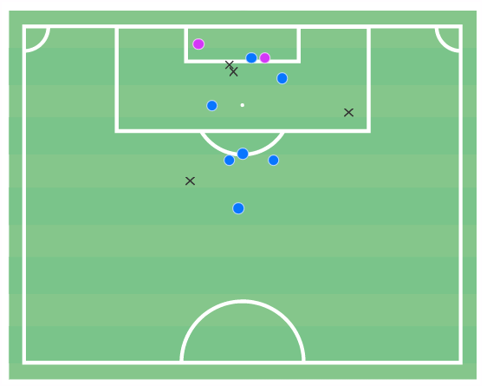 The player has attempted 13 shots this season with an accuracy rate of 69.2%. His overall xG rate for the season has been 2.37. The above viz shows that Tillman is not shy of taking attempts from outside the penalty box and can also make runs into the 6-yard box to score goals. Both goals were scored from inside the 6-yard box. His shot accuracy is also high, and that makes him a threat to the opposition. Other than this, the player averages 4.64 touches inside the penalty box per 90 minutes. This shows that Tillman is ever-present in the attack and can score more goals going further into the season. 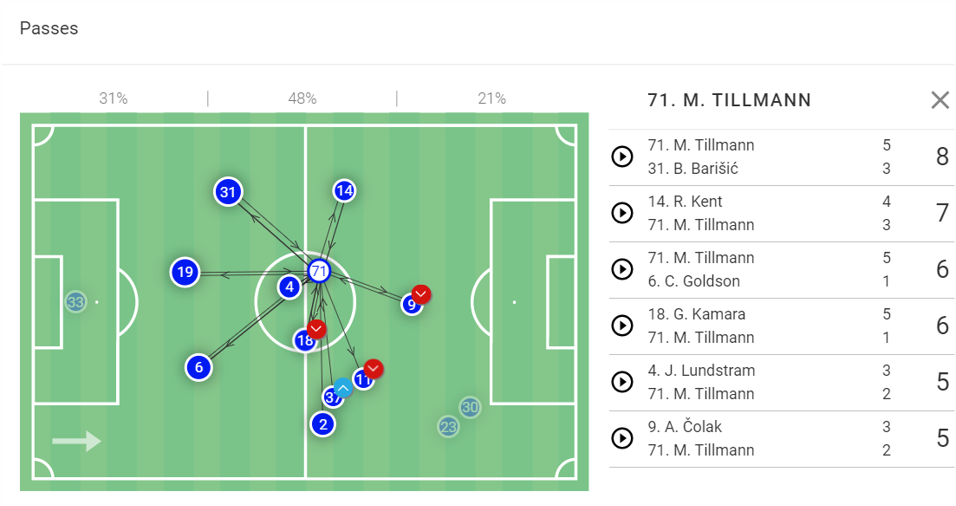 When it comes to passing, Tillman averages 27.7 passes per 90 minutes with a 78.4% passing accuracy rate. These include 2.1 passes to the penalty box with a 36% accuracy rate. The above viz shows his passing links in the second leg against PSV. Tillman played a deeper role in the match and linked play between the attack and the midfield. He will play a key role in Rangers’ campaign in the Champions League. 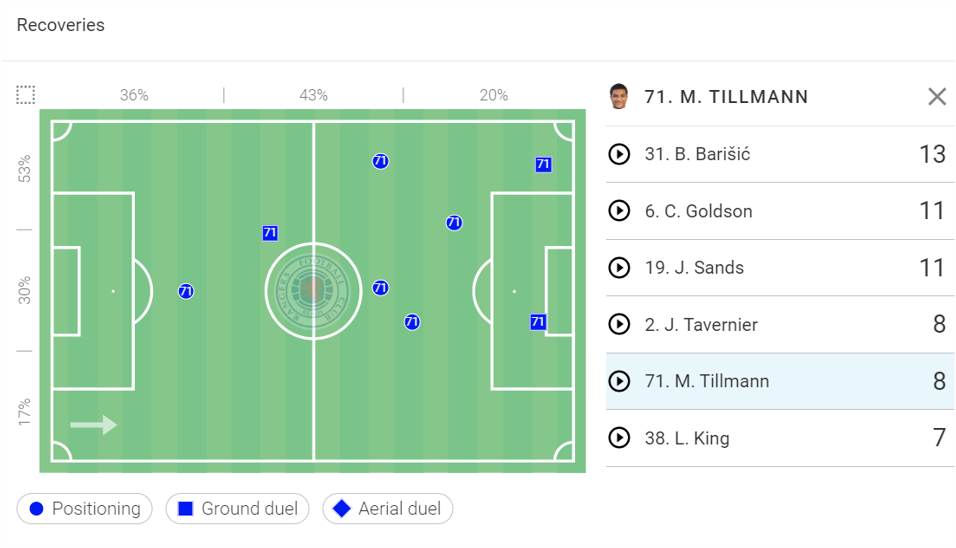 Tillman has made some crucial defensive contributions by winning 42% of his duels. He also averages three interceptions per match and 5.5 recoveries per 90 minutes, with more than 50% of the recoveries coming in the attacking half. In the last match against Ross County, Tilman made eight recoveries, and six of them came inside the opposition’s half. His work rate is high, and he is appreciated by the Rangers faithful.

Rangers will be happy to acquire Malik Tillman on a loan spell. He is making his mark in European football and could be the next big thing. Giovanni van Bronckhorst has managed his workload nicely and will look to use him as an x-factor in the season. Tillman will also look for glory in his spell at the club.