Rangers signed 21-year-old American full-back James Sands in January on a long 18-month loan spell. The player made a few appearances in the league last season and is looking for his first full season at the club. The Scottish Premiership runners-up are also looking to assess the player and sign him based on his performances. Sands is a versatile player who can play as a full-back and a defensive midfielder. Giovanni van Bronckhorst was impressed with his versatility on the pitch, and he could be a great asset in Rangers’ pursuit of getting back the league title from Celtic. 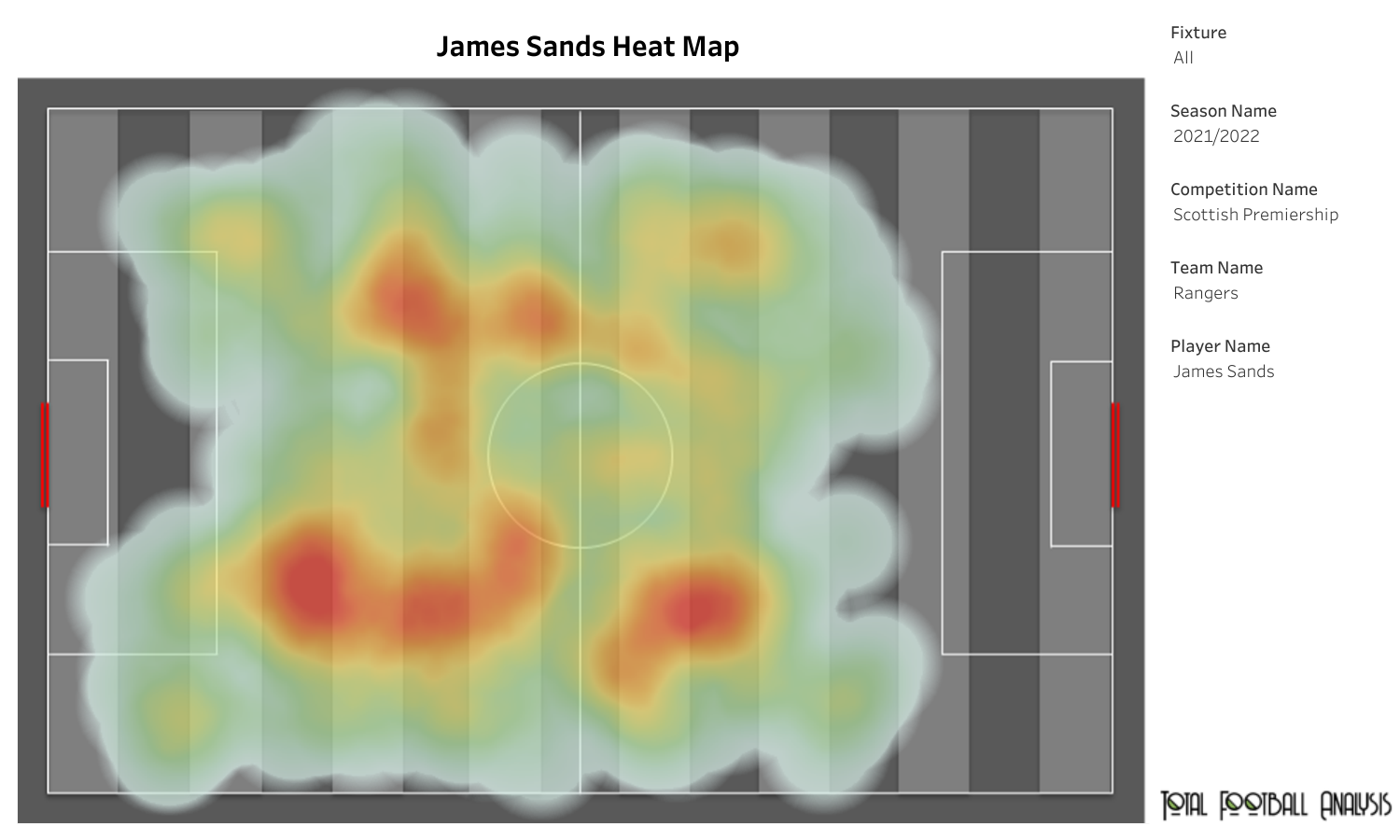 Sands made seven appearances in the league, two of them after coming off the bench. He mostly featured in the midfield and sometimes in the defence. The above heat map shows his position on the pitch. Sands was involved in a few attacking actions and was mostly controlling the midfield. His average position was around the centre circle. 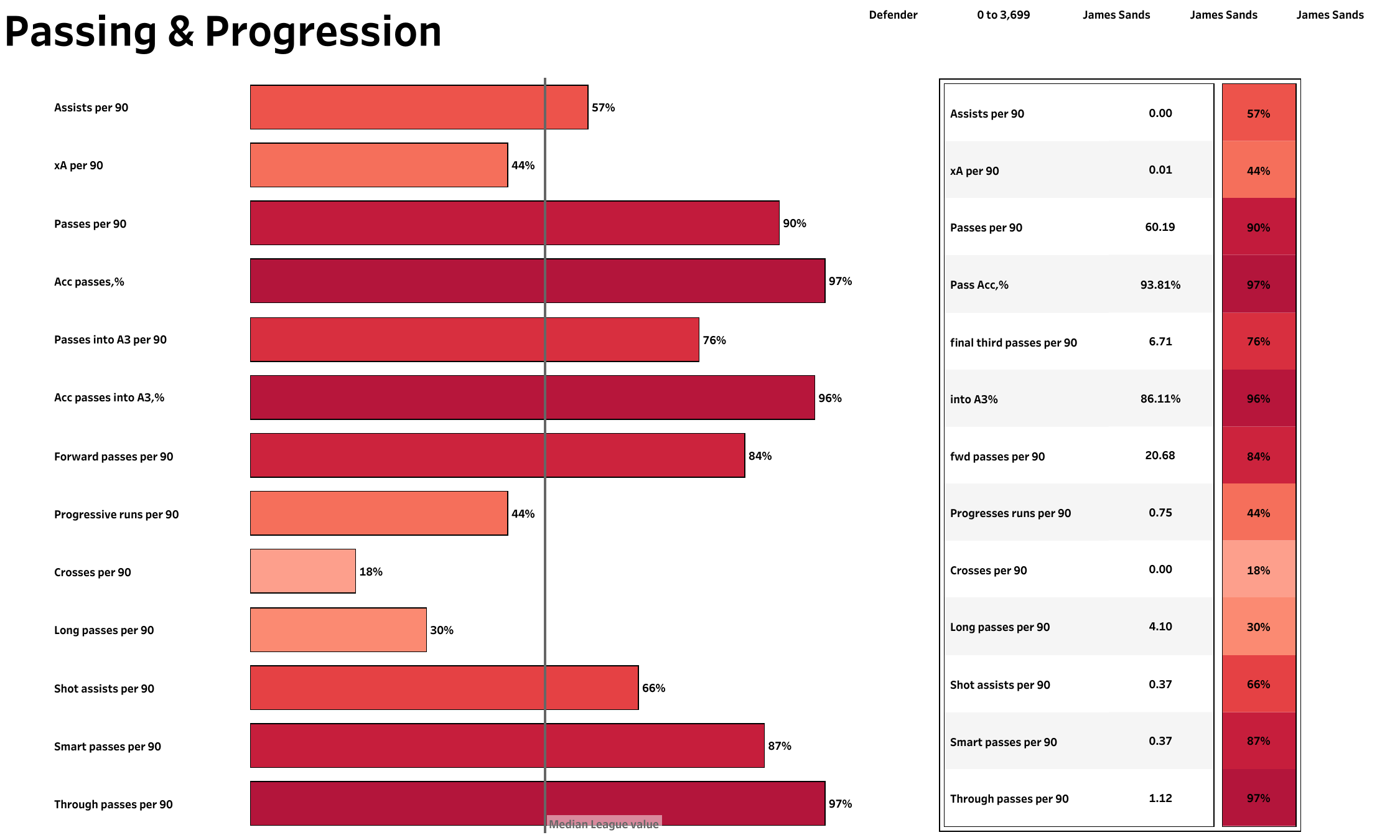 James Sands was impressive with his passing in the limited game-time that he got on the pitch. When looking at the above chart, the general rule is that the longer the bar, the better the performance — you can see the league average in the middle, and the % is the percentile rank the player is in. The player averaged 60.19 passes per 90 minutes with a high passing accuracy rate of 93.81%. Of these 60.19 passes, 20.68 were forward passes that he attempted per 90 minutes. Notably, the player had a high success rate for attempting passes into the attacking third. Sands failed to attempt a cross in these seven appearances but averaged more than one through pass per 90 minutes. He wasn’t that effective with his passing but played a crucial role in linking the plays. 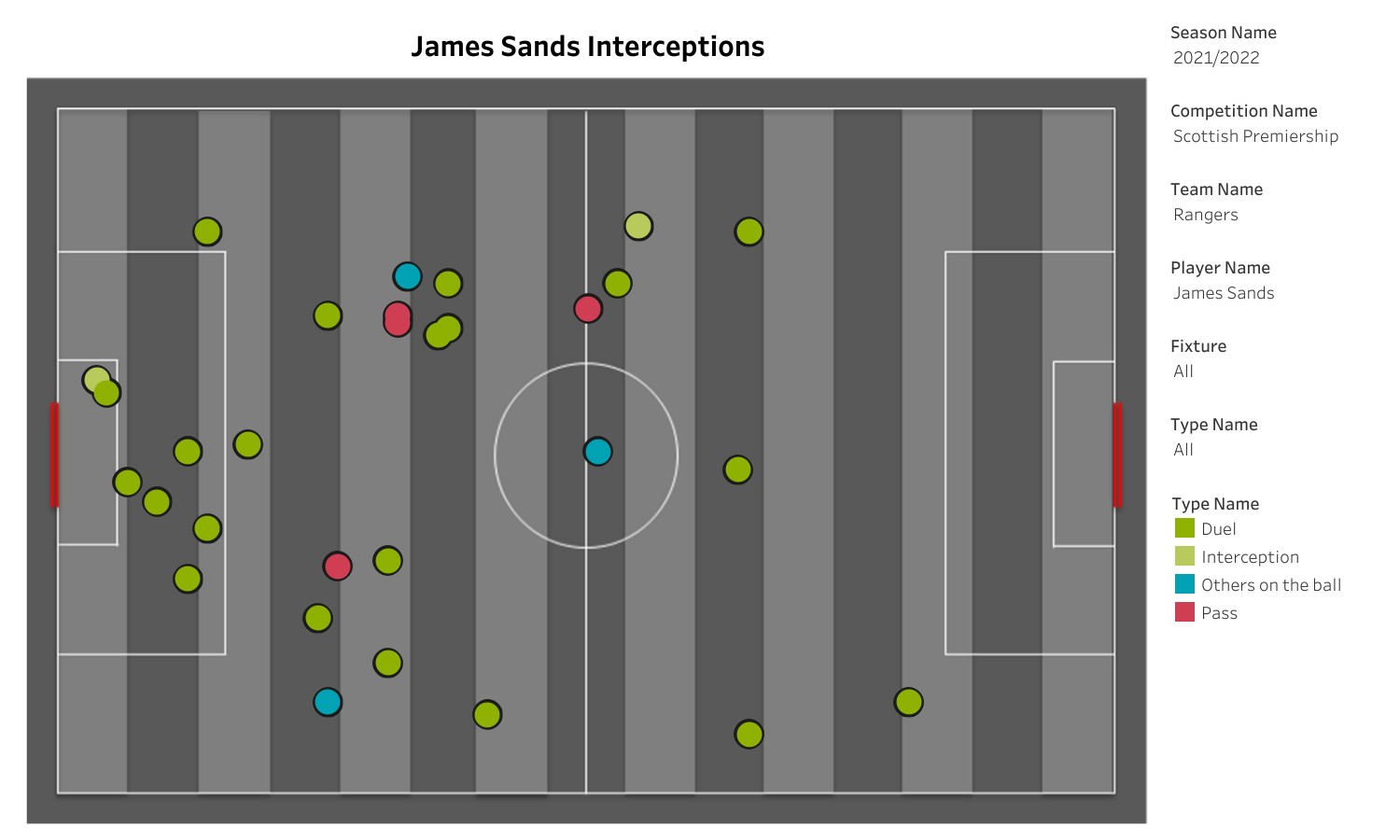 The 21-year-old had limited game-time, and that meant that he was involved in a few defensive actions. The above viz shows 30 interceptions that were made by the player. Most of the interceptions were made while contesting duels. Other than this, he contested 4.47 defensive duels, 2.61 aerial duels and 5.03 loose ball duels per 90 minutes, respectively. His success rate was 25% for defensive duels, 64.29% for aerial duels, and 22.22% for loose ball duels. This proves that he was strong in the air and often challenged the loose balls. The player also made 55 recoveries, and 18 were made inside the opposition’s half.

James Sands provided a defensive shield in front of the centre-backs. He was contesting duels and clearing threats for his team. He can expect more playing time in the coming season as he attempts to cement his spot in the starting lineup. The manager will also expect him to contribute towards scoring goals and provide more stability to the defence.