Jack Simpson started his youth career at the English club AFC Bournemouth. The defender signed his first professional contract in 2015. He spent six years at the club and made only 37 appearances for the Cherries. Simpson made a move to Rangers in January 2021 and was a part of the Scottish Premiership 2020/21 title-winning team. Last season, the defender made five appearances for the club. This season, he once again failed to get a lot of opportunities. Simpson only appeared in four league games for the Rangers and spent 164 minutes on the field. He provided an assist in the league, and that was his first goal-scoring contribution to the club. The Scottish Premiership runners-up signed John Souttar from Hearts. He is likely to pair with either Calvin Bassey or Connor Goldson. Simpson has the experience of playing more than ten English Premier League games and has been a good back-up for the injured players. 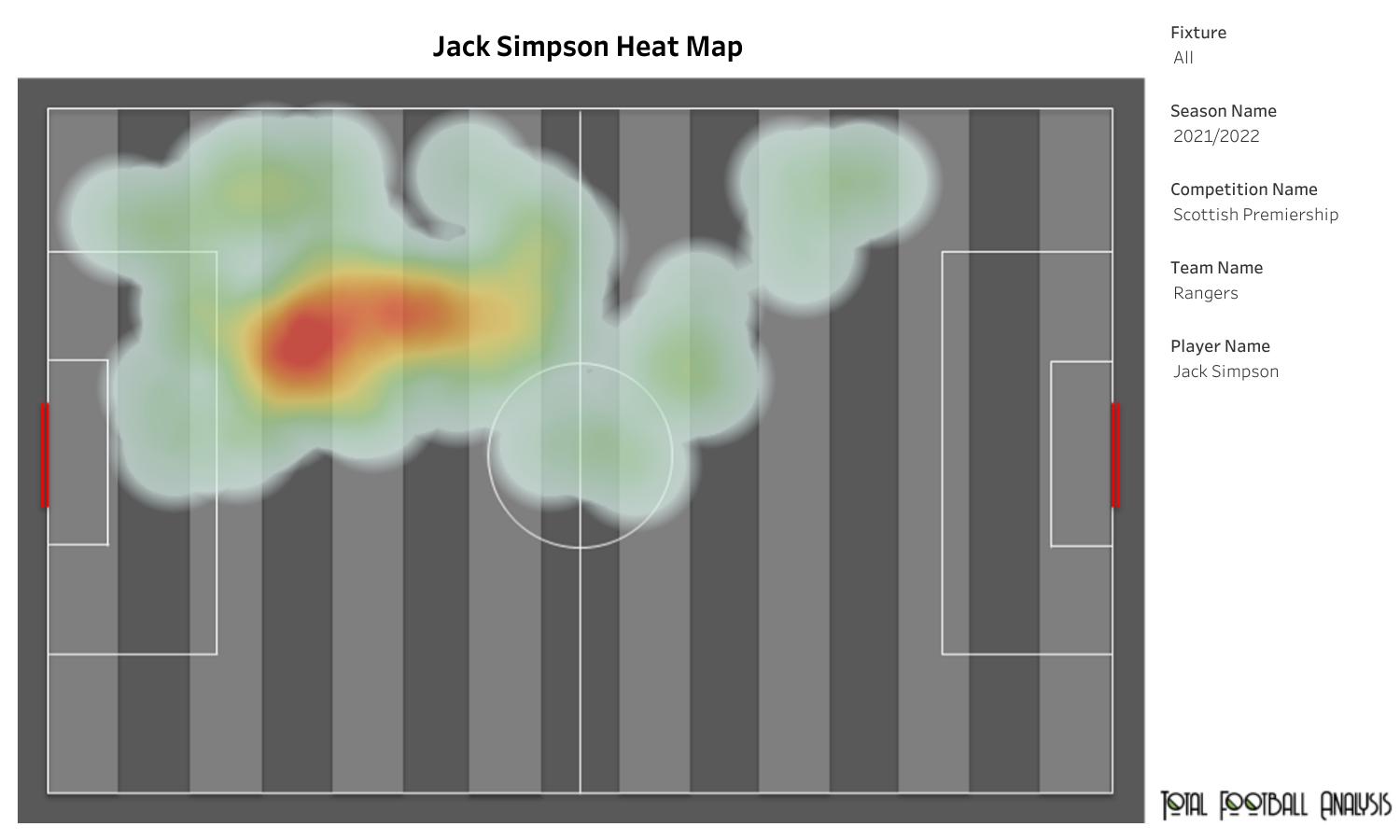 Simpson made three appearances in the first half of the season and his last appearance in May. He played full 90-minutes against Motherwell in one of the matches. The above viz shows the heat map of the player in four Scottish Premiership appearances. Jack Simpson played as the left centre-back for his side. 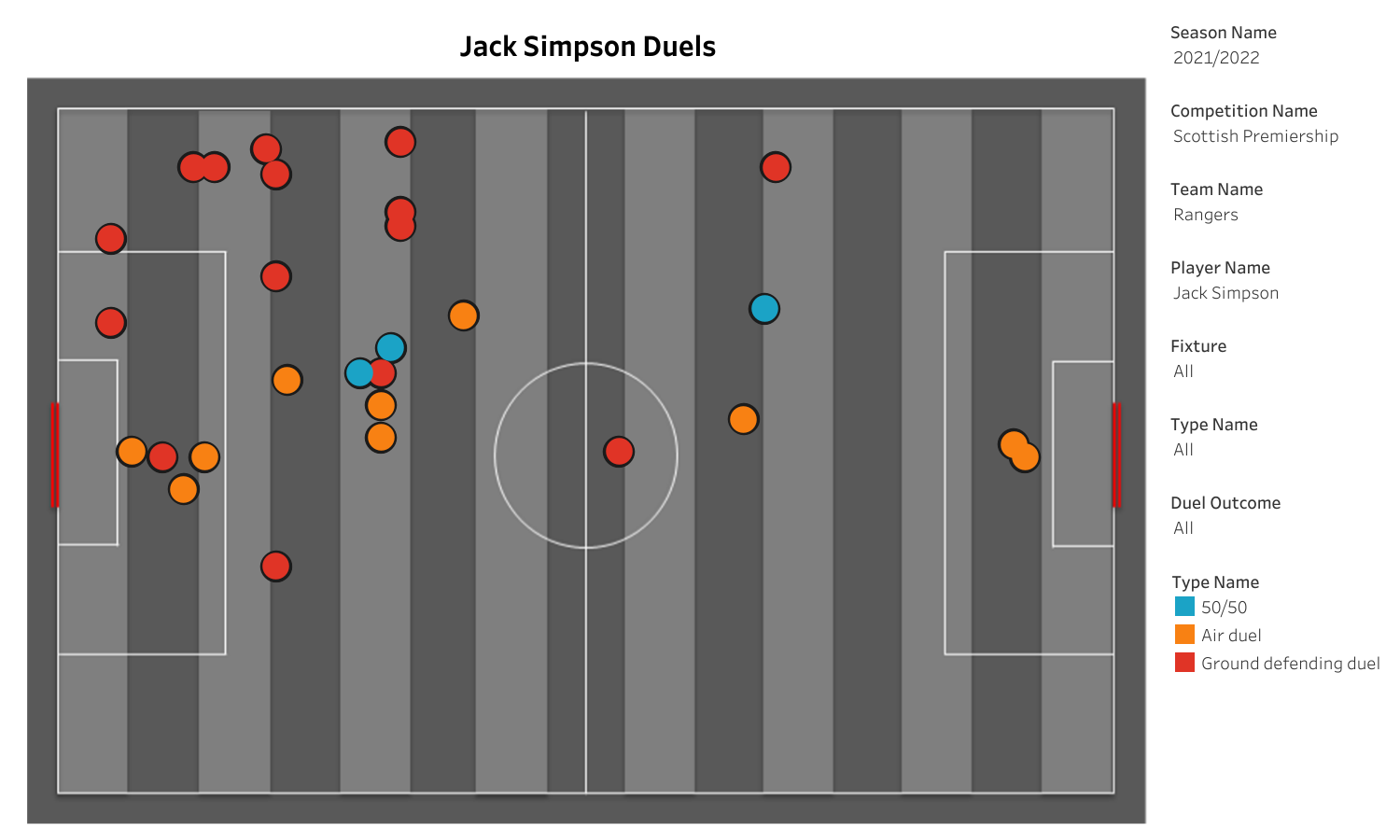 The centre-back was involved in 12.6 defensive actions with a 78.26% success rate. The above viz shows all the duels that were contested by the player. Simpson was involved in 8.23 defensive duels, 5.5 aerial duels, and 1.65 loose ball duels per 90 minutes. He won 26.67% of the defensive duels, 80% of his aerial duels, and 33.33% of his loose ball duels. Simpson is not a very tall defender, but his stats show that he is good and strong in the air. Such players also possess a great threat of scoring goals from set-pieces. His other defensive contributions include 3.8 interceptions and 12.6 recoveries per 90 minutes. 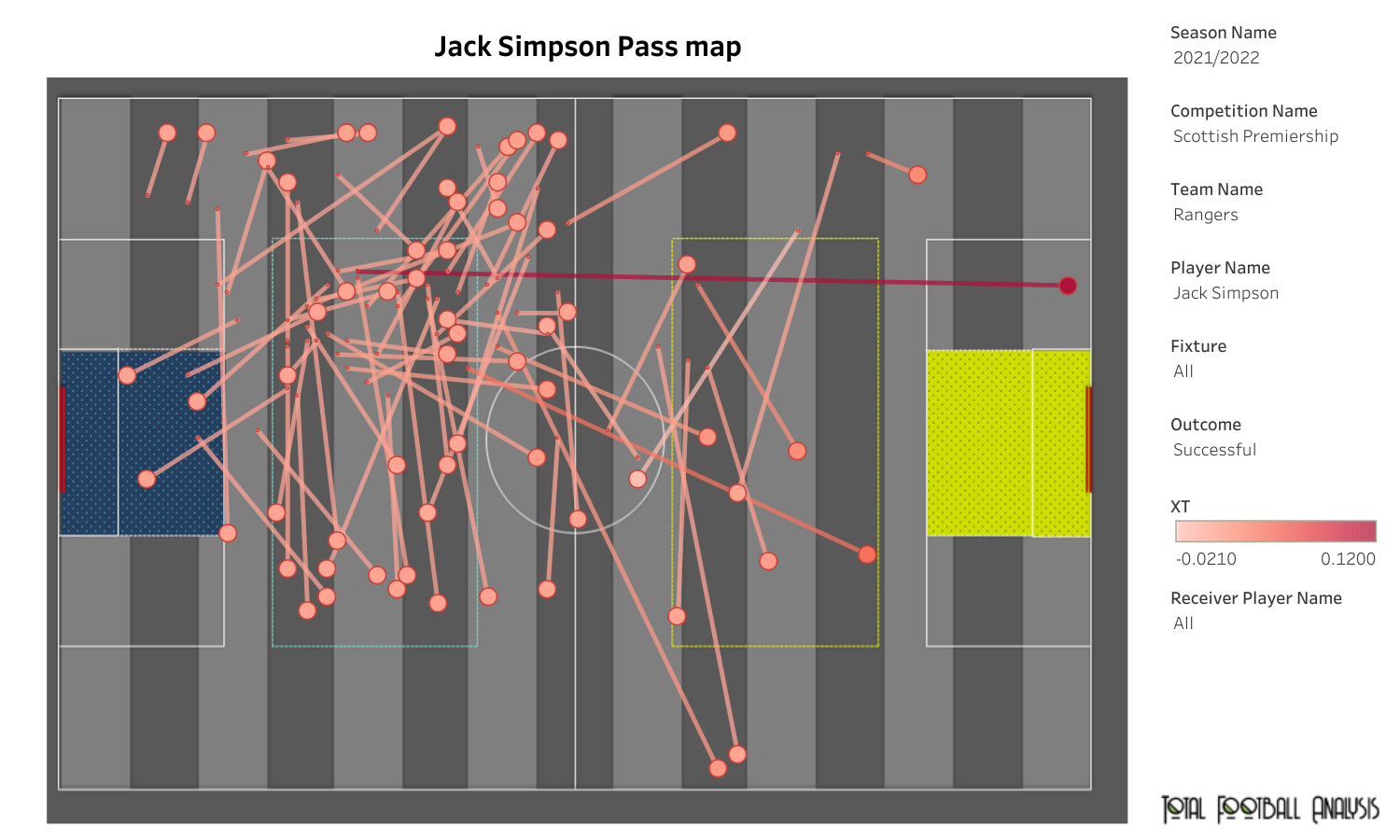 Simpson averaged 40 passes per 90 minutes with a high accuracy rate of 91.8%. The above viz shows all the passes that were successfully delivered by Simpson. He managed to find a teammate inside the opposition’s penalty box and that pass was converted into an assist. The pass was directed towards striker Kemar Roofe. This shows that the player can play the ball from the back.

The 25-year-old showed his defensive capabilities and the ability to pass the ball. He has not played a lot of games in his professional career. The player will be expecting the manager to use him frequently and give him more minutes on the pitch. His aerial abilities make him a threat and can become handy during set-pieces while defending and attacking.