Rangers will host St. Mirren in round ten of the Scottish Premiership. The hosts are sitting in second and have a four-point lead over their weekend opponents. Both teams are sitting in the top three.

Rangers earned a comfortable 4-0 win over Hearts in the last round. The Gers have now won six matches, drawn one and lost one each. Rangers have struggled in the UEFA Champions League and suffered their third consecutive defeat in the competition. They will be looking to win their league games and catch the league leaders, Celtic. Rangers have scored 20 goals with an average xG rate of 1.88 this season. Their defence has conceded eight goals and averages 0.75 xG.

St. Mirren have started the season well with five wins and three losses in the first eight games. The two goals last weekend took their goal-scoring tally to ten goals, and the team has conceded nine goals. They averaged 1.12 xG and 1.4 xGA per match this season. 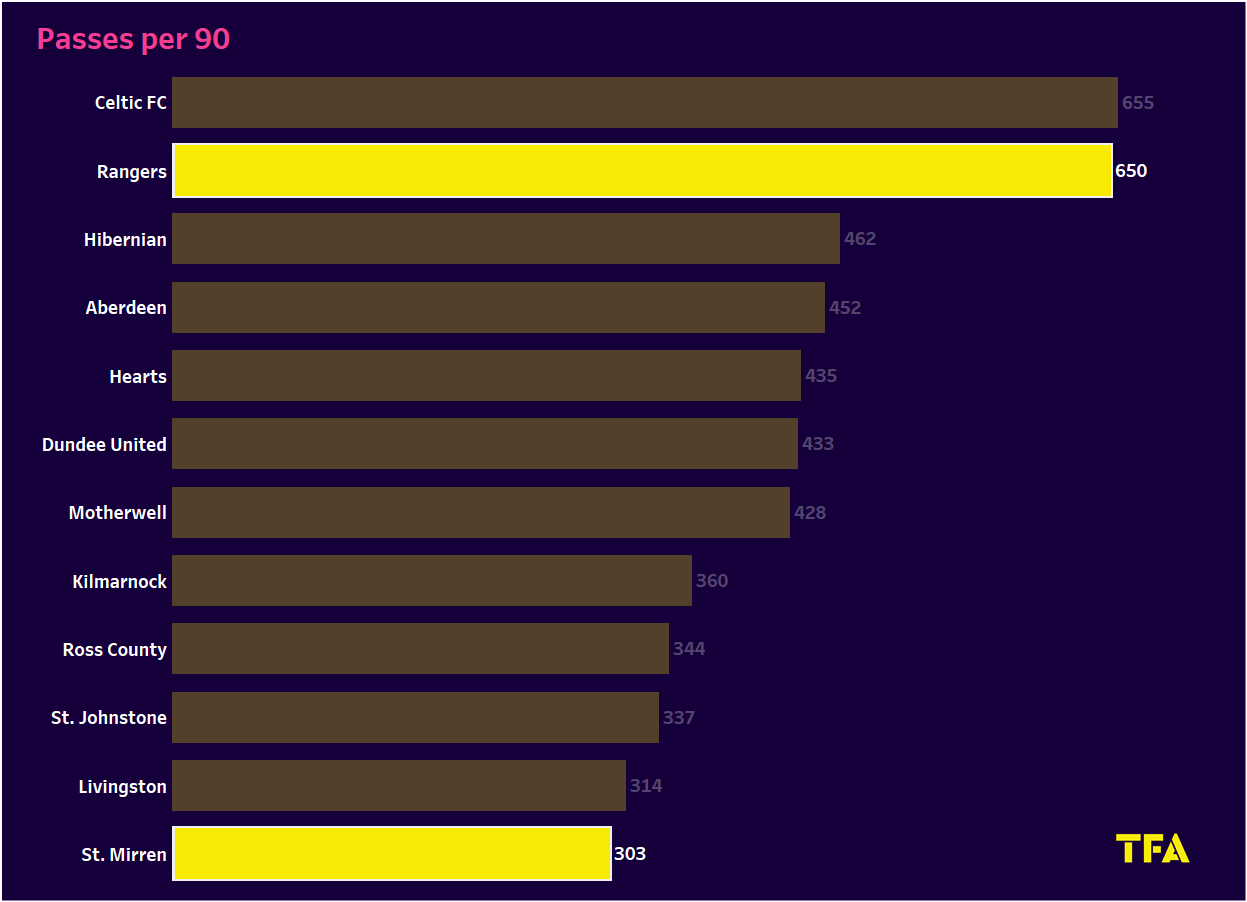 The home team is likely to keep a larger share of the ball. They average 64.91% ball possession this season and have attempted the second-highest number of passes with an accuracy rate of 87.4%. Their opponents have struggled in the same areas despite sitting third in the table. They average 40.4% ball possession and have the lowest average of passes per 90 minutes. St. Mirren players also have a low accuracy rate of 69.7%, which shows why Rangers are likely to dominate possession. 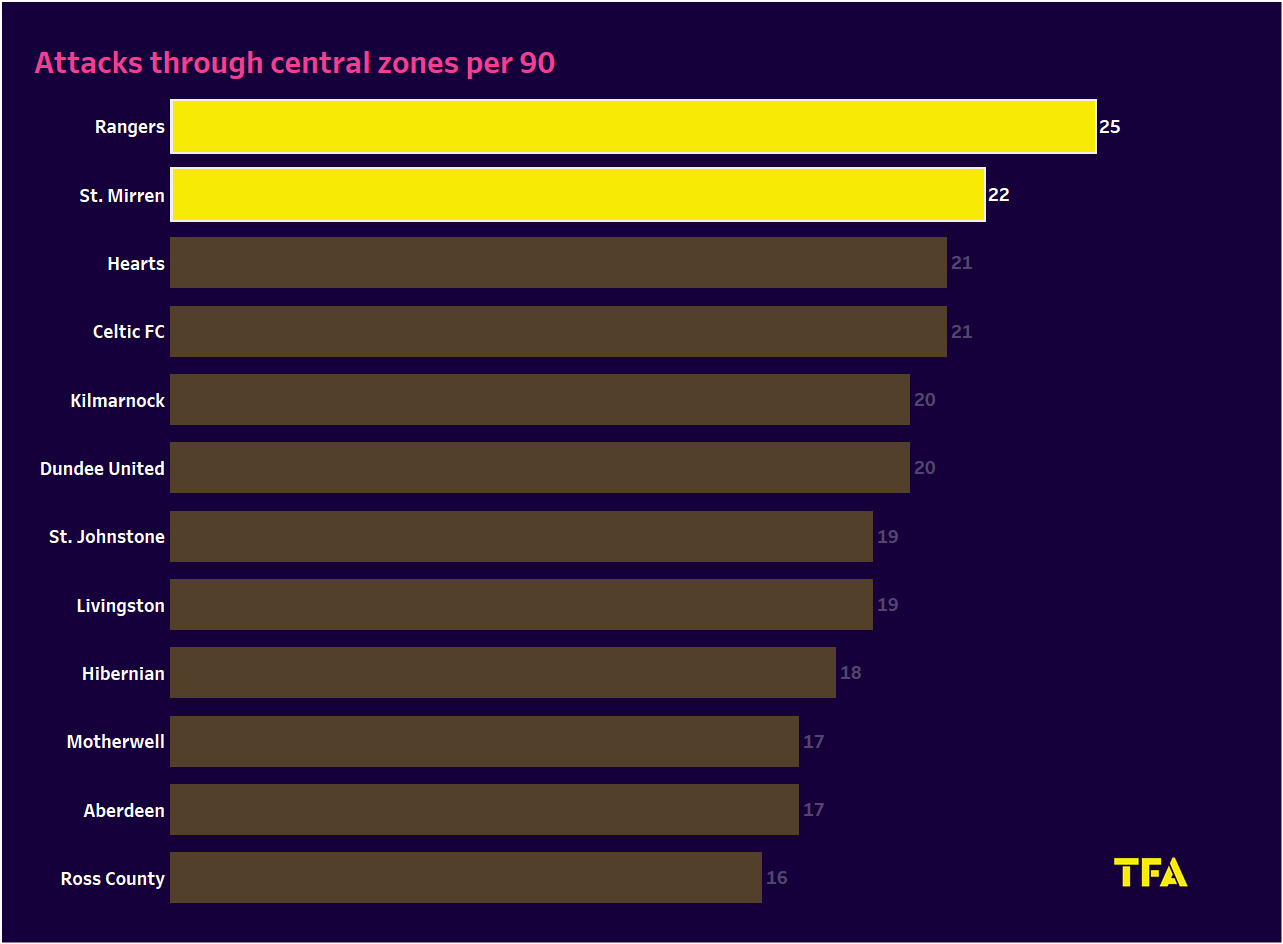 The above viz shows that both teams like to attack from the centre. Rangers average 39.25 positional attacks per game, while St.Mirren averages 27.88. The home team attempts 16.6 shots per game while their opponents just attempt 8.88 shots per match. These two teams are likely to continue with their game plan and attack through the centre. 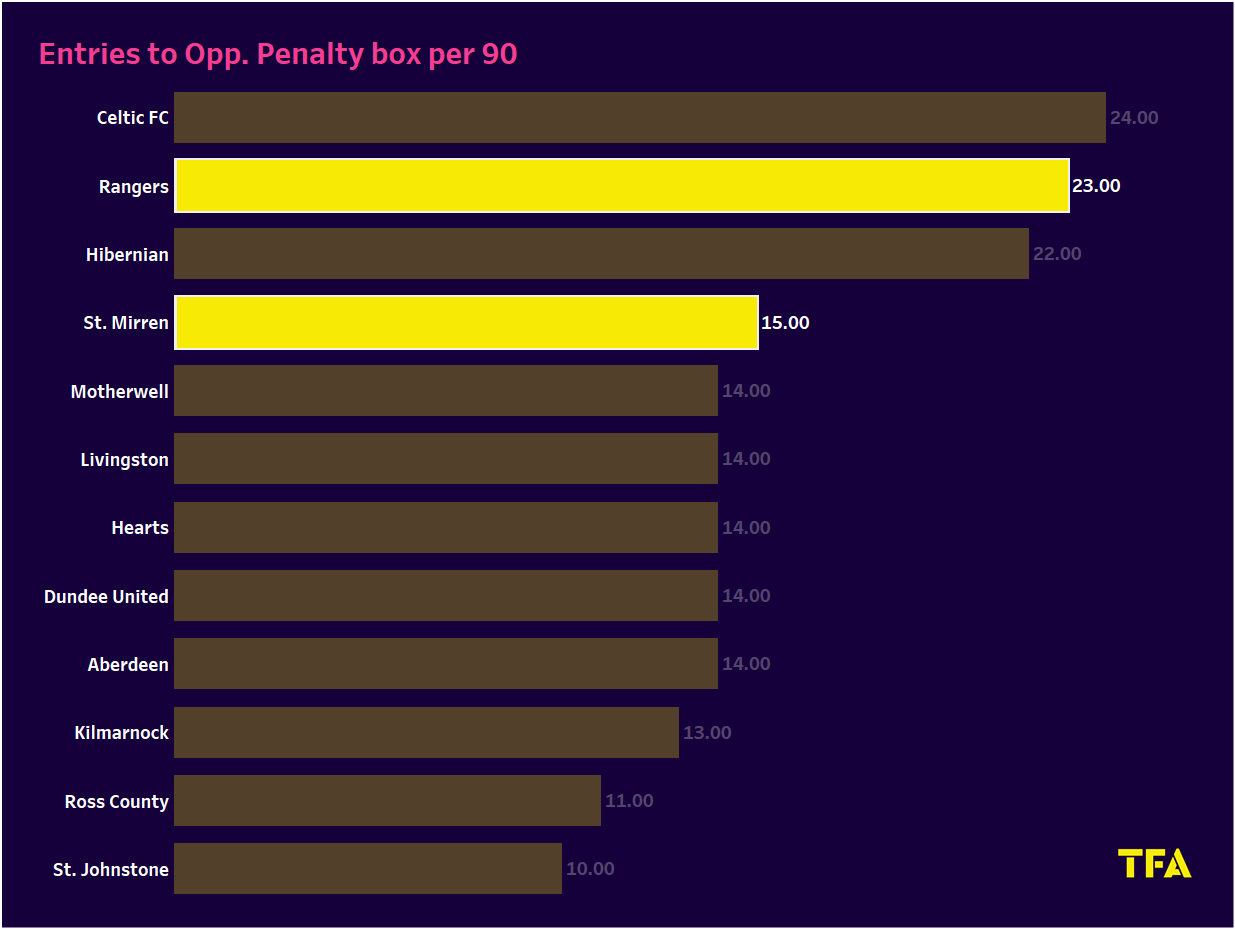 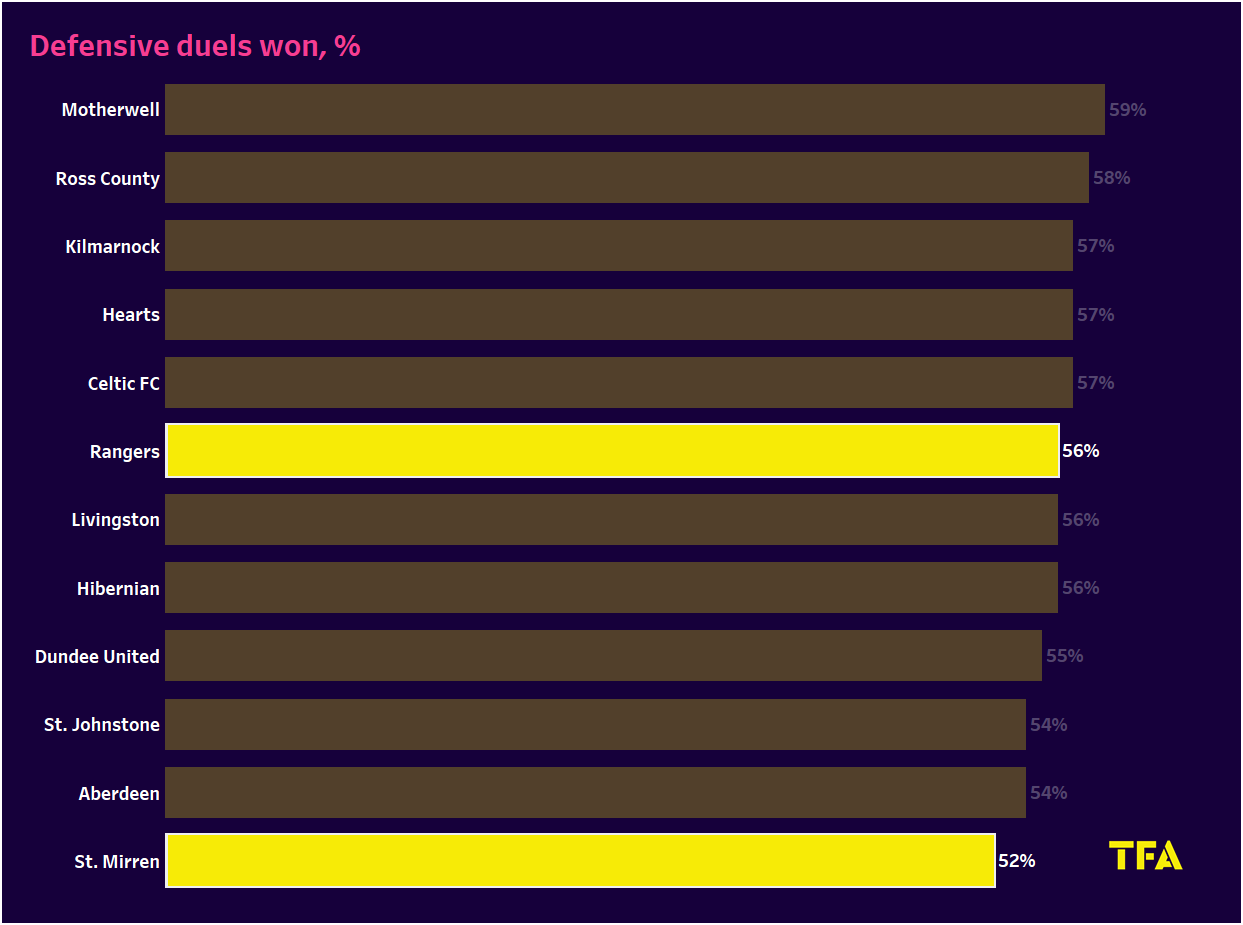 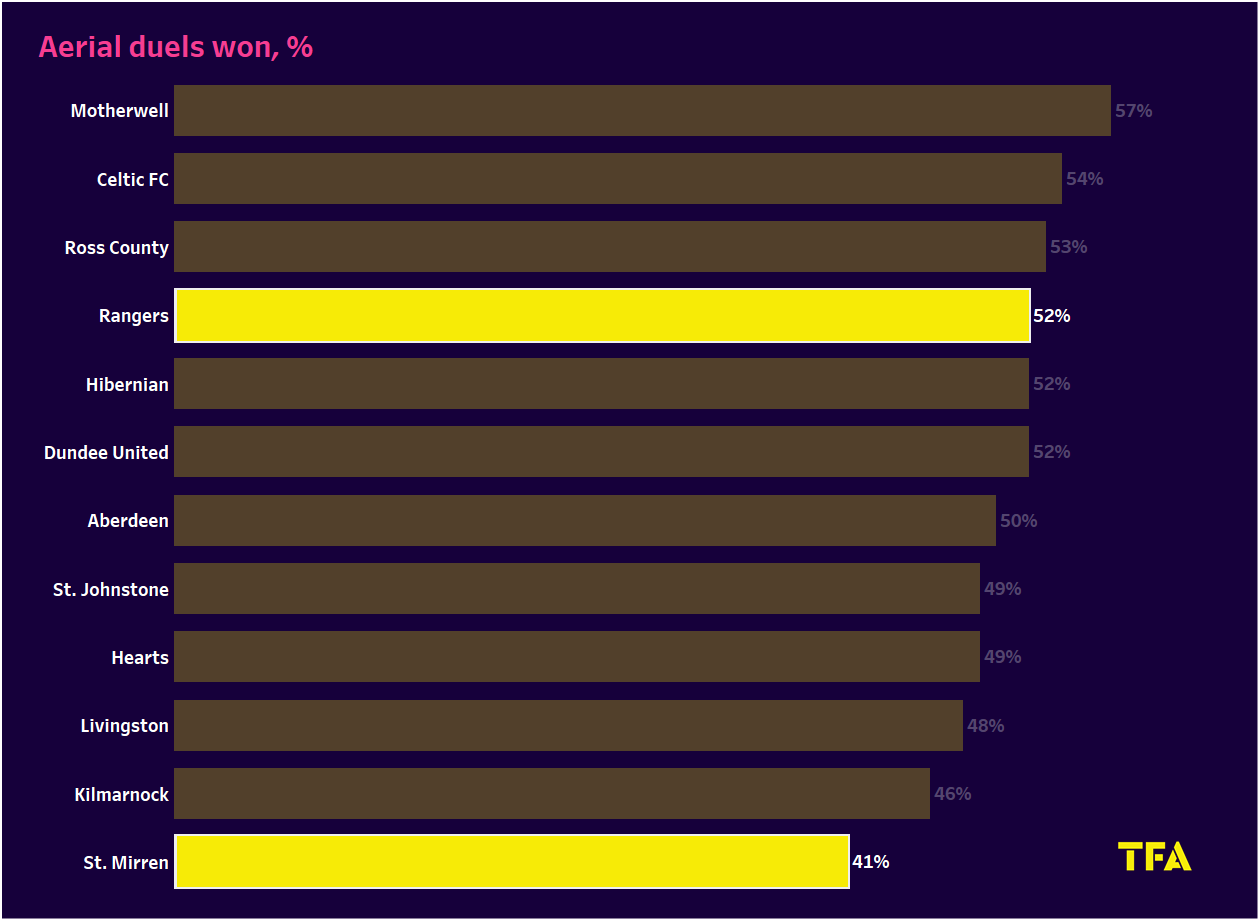 Rangers will have a chance to improve their attacking stats and will challenge this St.Mirren defence. The visitors have the lowest defensive, as well as the lowest aerial duels, win percentage in the league. The Gers will look to take their chances, especially in the air. 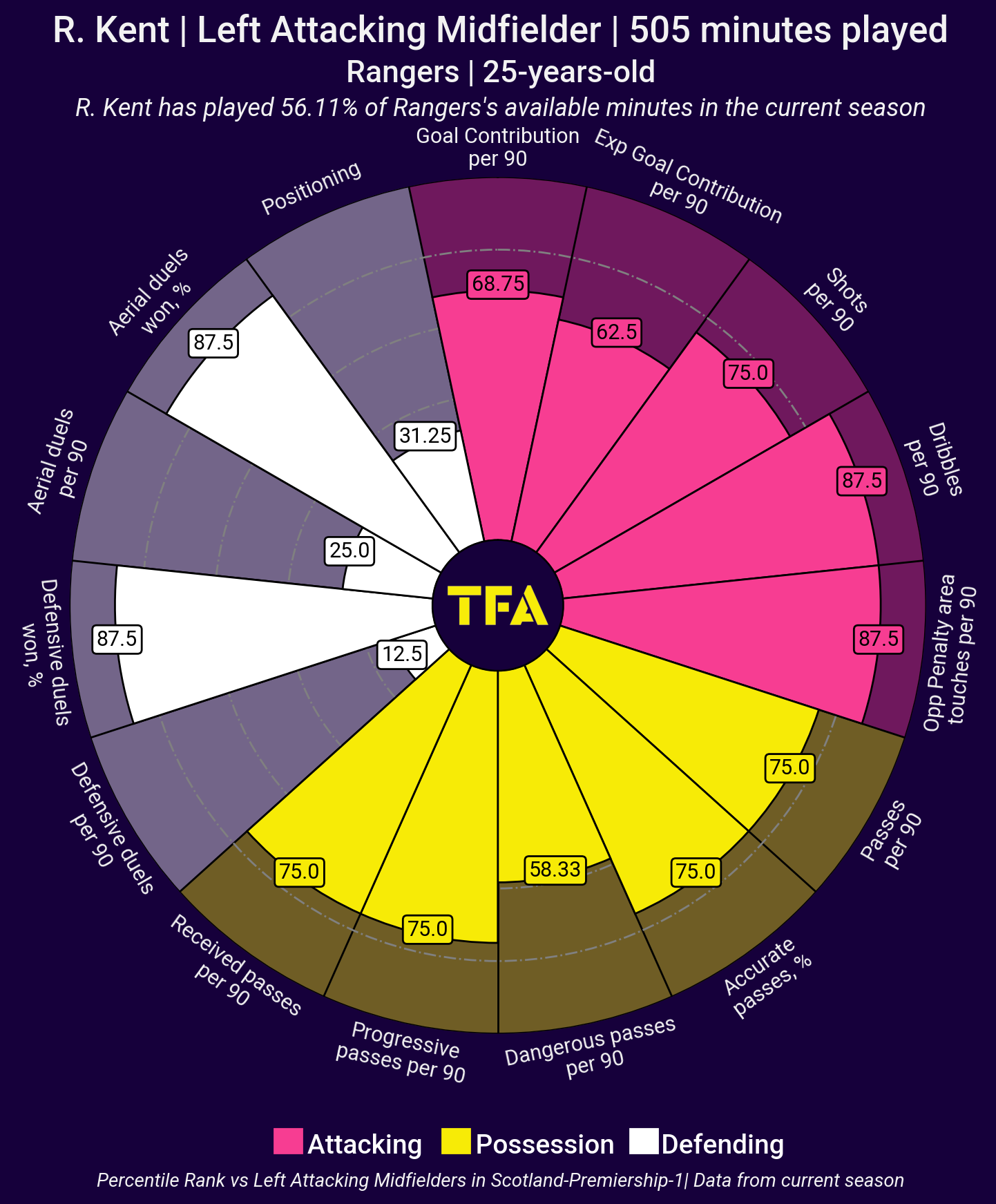 Ryan Kent scored his first goal of the season last weekend. The winger also has four assists to his name. This makes him a key player for Rangers. The above viz shows the stats of the player in comparison to the other wingers in the league. The data shows the percentile rank of the player. We can observe that Kent likes to penetrate the opposition penalty box and is quick with his feet. His defensive contributions have also been good, and the player will play a key role in this match. 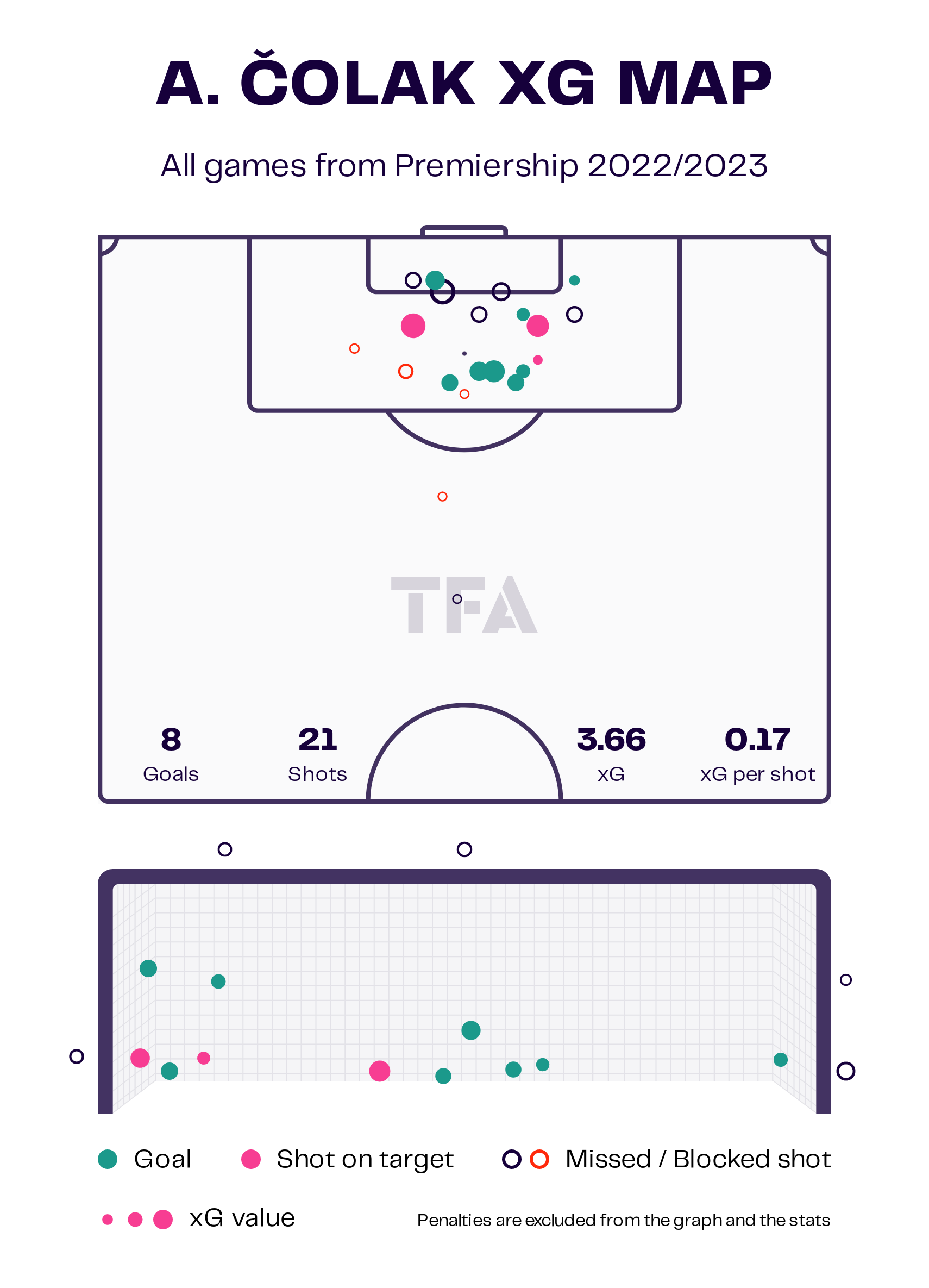 Antonio Colak managed to score a brace last weekend and was rested for the UEFA Champions League tie. He has eight goals to his tally and will be the main goal-scoring threat for the Gers. The player has started in every match and averages more than 3.5 shots per match. St. Mirren’s defence might have a tough time against a striker who can win aerial duels.

Rangers have no new injury issues. Antonio Colak is likely to return to the starting 11 after making an appearance from the bench in the UEFA Champions League.

St. Mirren will be without Jonah Ayunga. The forward is their top goalscorer with four goals but is suspended for this match after getting sent off in the previous one.

Rangers will be the favourites to win this match. They will look to secure three points in this match as soon as possible and rest their key players for an all-important clash against Liverpool in the midweek. St. Mirren, on the other hand, will look to cause an upset and take at least a point away from this match.