Rangers are interested in signing Aston Villa youngster Cameron Archer. The 20-year-old striker spent the second half of the season out on loan at English Championship side Preston North End. He scored seven goals in the 20 appearances that he made for Preston, and a few teams have set their sights on the youngster. Rangers struggled to score goals in the absence of Alfredo Morelos last season. The striker is into his last year of the contract, and the Scottish Premiership runners-up might try to cash in on the striker. They are in search of a striker who could score regular goals and have scouted such players, with Cameron Archer being one of them. 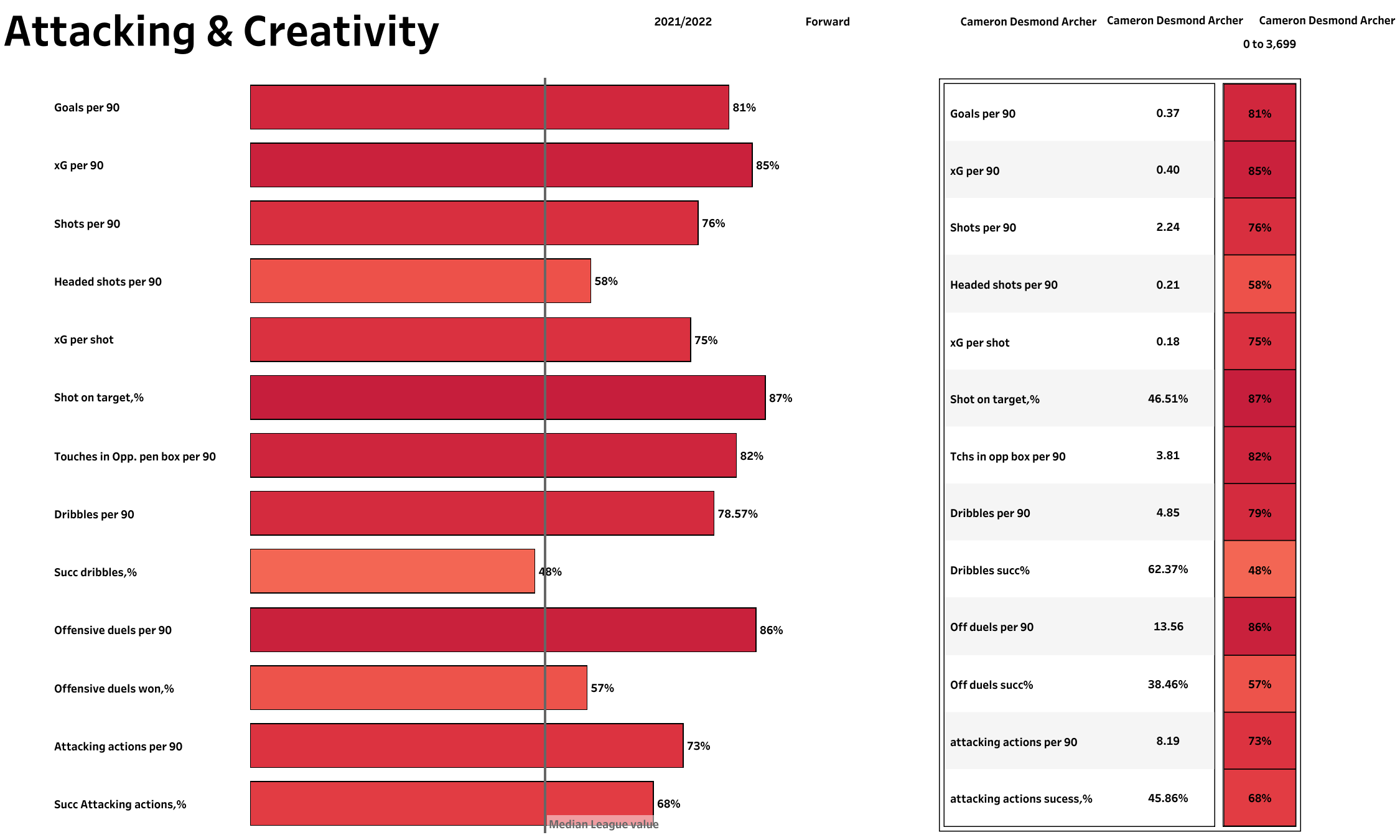 Archer started in 18 games for Preston and came on as a substitute in the remaining two matches. He scored seven goals past the opposition goalkeeper and also provided an assist. When looking at the above chart, the general rule is that the longer the bar, the better the performance — you can see the league average in the middle, and the % is the percentile rank the player is in. The striker was involved in 8.19 attacking actions per 90 minutes and had a 45.86% success rate. He contested more than 13 offensive duels and had a 38% success rate. Archer had a high rank in comparison to the other strikers in the league. 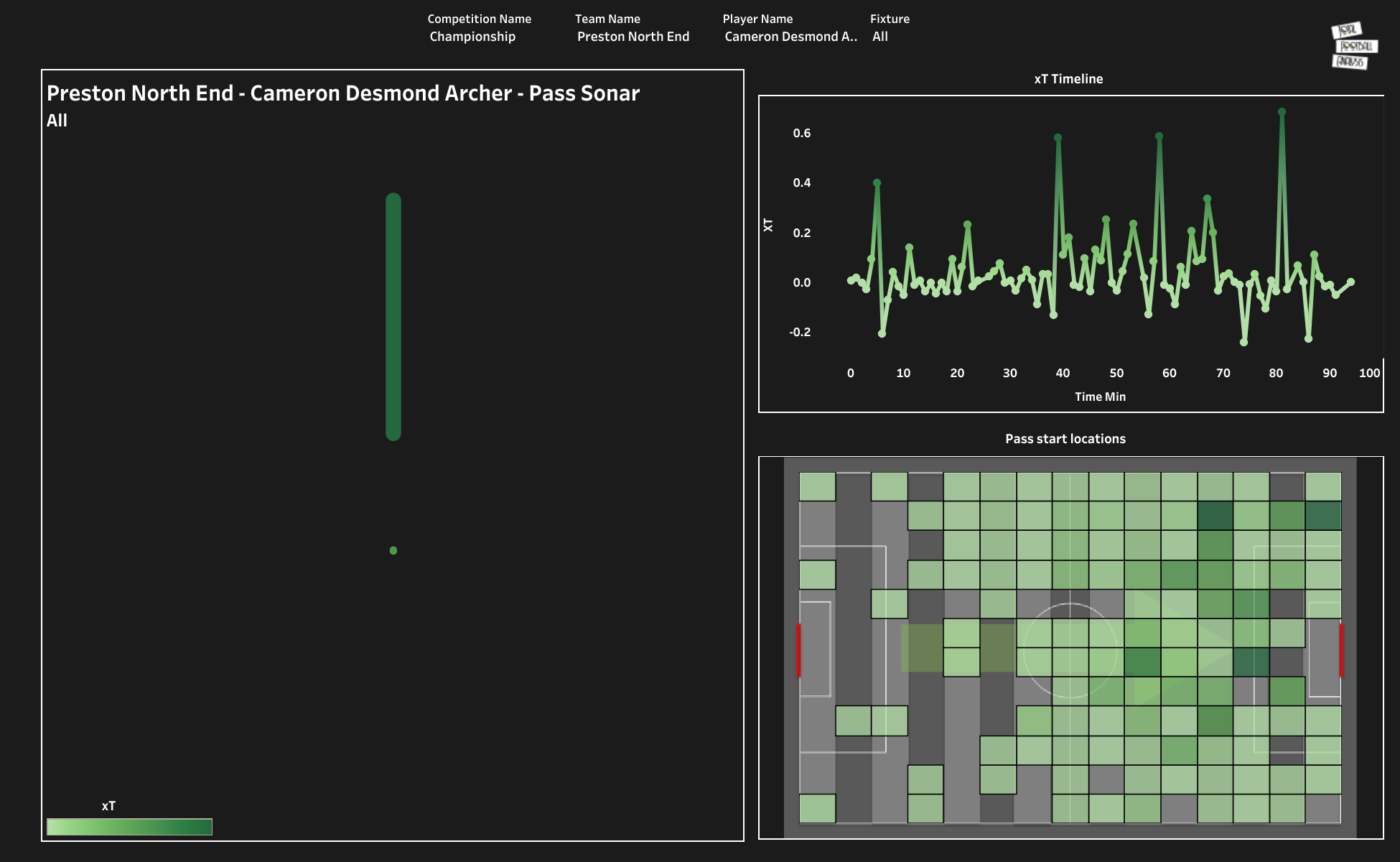 The above viz shows the pass start location as well as the threat created from passes at different time intervals. By looking at the pass start location, we can observe that the striker covered a lot of area in the middle third and final third. However, he featured more from the left side and created more threats from that particular side. The striker even penetrated the opposition’s penalty box and averaged 3.81 touches inside the box. Archer averaged 14.91 passes per 90 minutes with an accuracy rate of 78.67%. His passing was not that effective, but he took some dangerous positions inside the opposition’s penalty box to deliver passes. 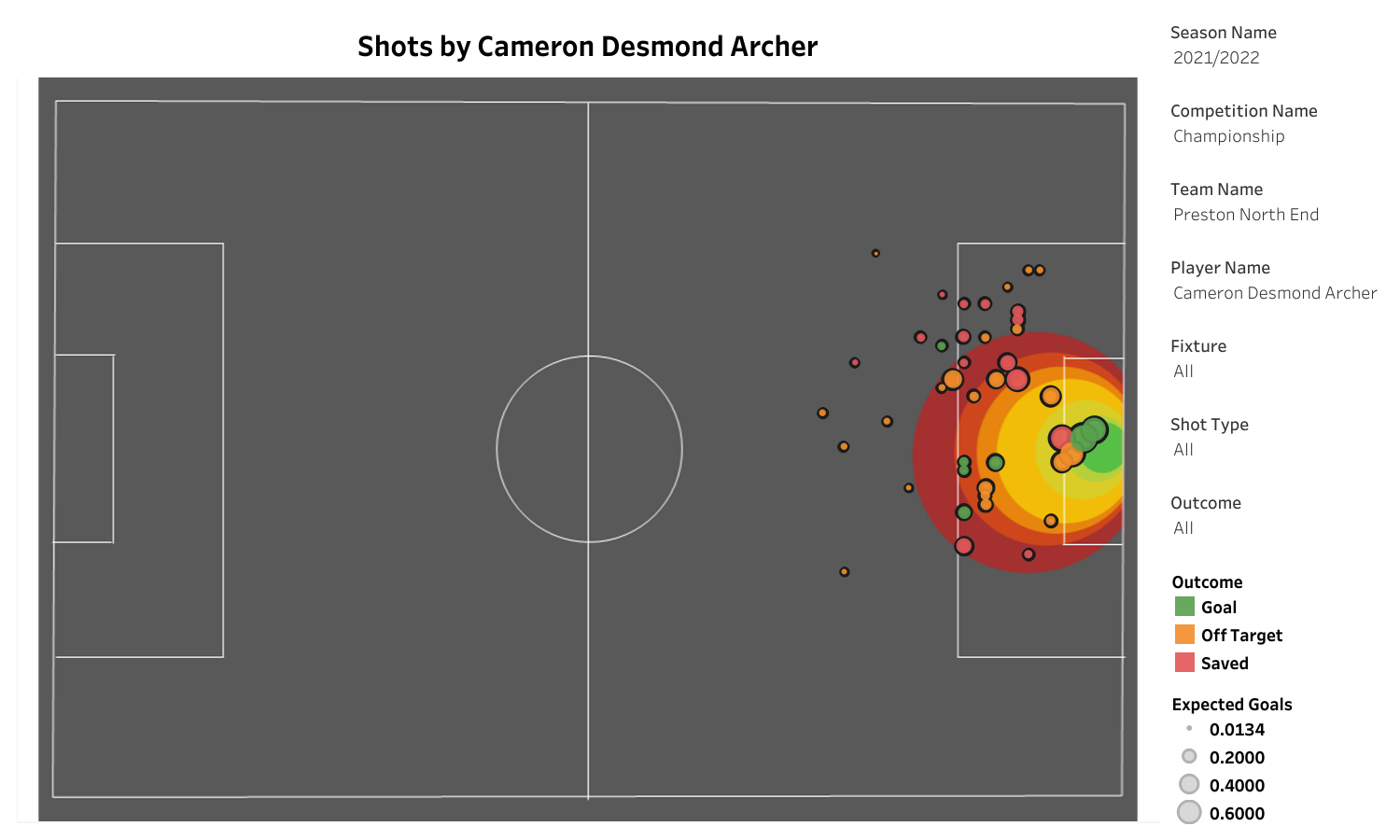 The 20-year-old attempted 43 shots last season in 20 matches and averaged 2.24 shots per 90 minutes. Of these 43 shots, he managed to hit the target 20 times. By looking at the above shot map we can observe that Archer scored six goals from inside the penalty box and one goal from the edge of the box. He took some dangerous positions inside the opposition’s 6-yard box and scored two goals. He can get on the end of passes and create opportunities for himself.

Cameron Archer is a young striker and could be a good addition to the Rangers squad. He could make an impact from the bench and prove to be a useful signing. The striker is a threat going forward and could be a good option for Rangers in the long run.