Rangers have dropped to second place in the Scottish Premiership after a heavy defeat against Celtic. The defending champions also dropped a few points in their back-to-back draws in the league, and this widened the gap between the two teams. Since then, the manager has made a few changes to the team, and one of those changes is replacing left-back Borna Barisic with Calvin Bassey. Rangers sold Nathan Patterson to Everton in the recent transfer window and are short of full-back options. However, Bassey has impressed in the left-back role, and this has resulted in less game time for Barisic in recent weeks. 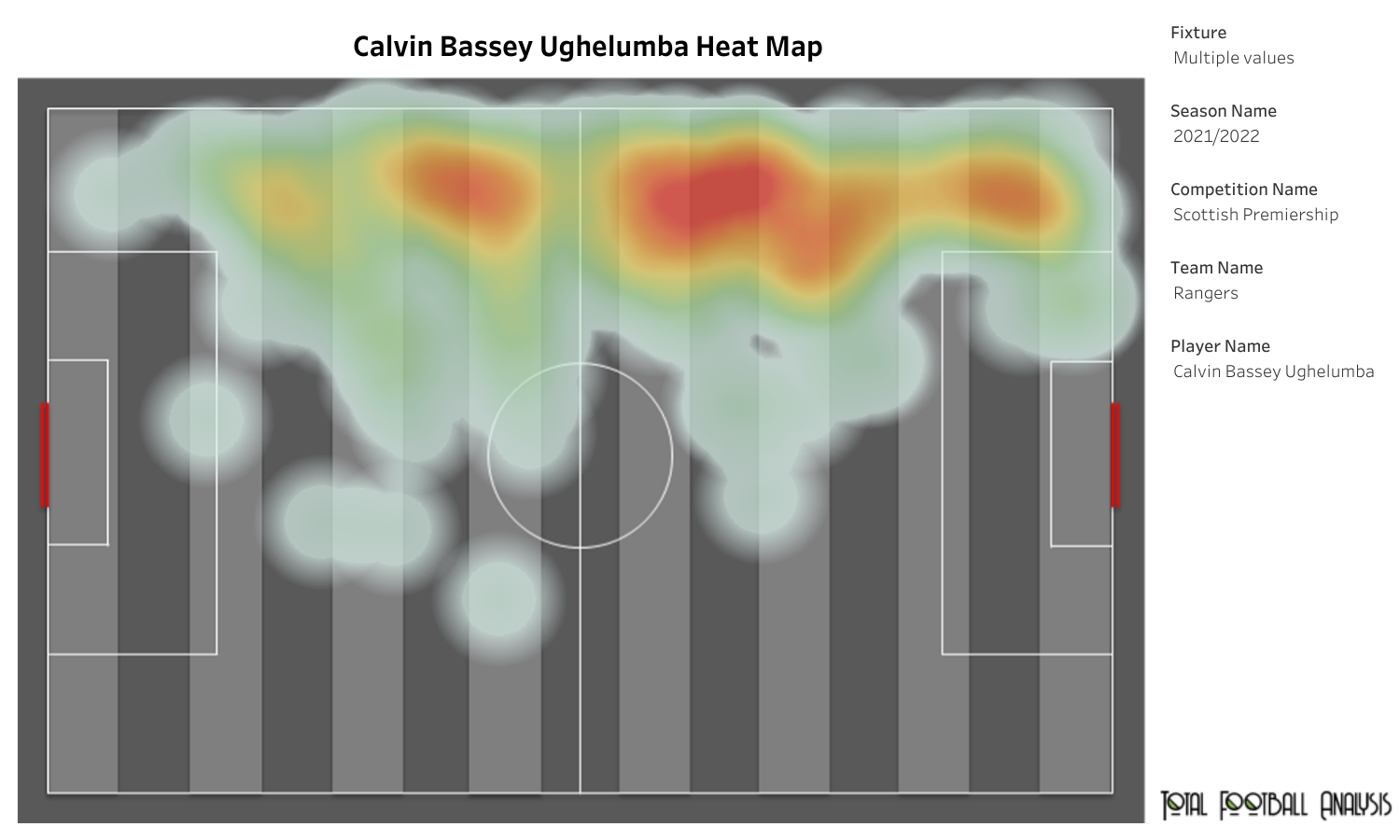 After the defeat against Celtic, Barisic featured in four out of the eight games played by his side. Giovanni van Bronckhorst replaced him with Calvin Bassey in the side. He has been versatile with his positioning and could also play as a centre-back in the team. The above heat map shows his position in the four matches in which he replaced Barisic. He spent the full 90 minutes on the pitch and even provided an assist against Dundee United.

The above pass map shows all the passes attempted by him in these four matches. The full-back attempted 250 passes, and nine of them successfully landed inside the opposition’s penalty box. Of these nine passes, two landed inside the opposition’s 6-yard box, and these passes created a lot of threats. Bassey has attempted the most passes towards Ryan Kent. He has provided him with 57 passes, and those passes have created a threat rate of 0.418. The highest threat rate is created by the passes towards striker Alfredo Morelos. Those 24 passes towards the striker have created a threat rate of 0.885.

Borna Barisic was a regular starter under Steven Gerrard. The full-back has created the second-highest threat rate with his passing this season for Rangers. However, van Bronckhorst made a bold decision by replacing him with the youngster, Bassey.

Borna Barisic’s performance has seen a dip since the winter break, and that has resulted in a lot of shuffling in the left-back role for Rangers. Barisic has been more impressive defensively, and Bassey is more of an attacking player. Rangers like to attack from the wide side and have better stats from the opposite side of where James Tavernier operates. With Calvin Bassey in the team, the manager can also play with a back three in a few stages of the match. As of now, Bassey has got the nod over his compatriot.